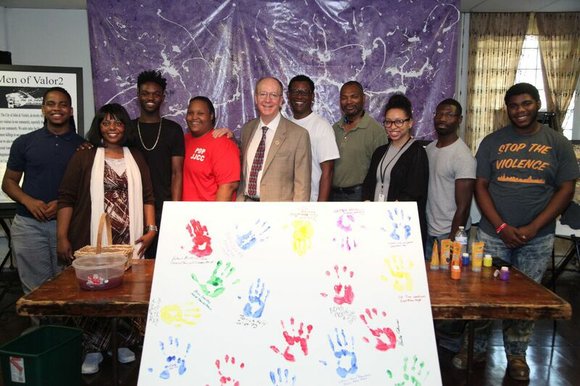 Local dignitaries including U.S. Representative Bill Foster signed one of the paintings to be part of the healing message to the families and friends involved in the tragedy in Dallas Texas.

Multiple deaths, grieving families and frightened communities are too often the results of gun violence, and when these national tragedies strike, they spread over the airwaves like a cancer.

Pastor Lonnie Posley Sr., of Joliet, chooses to respond with art. An artist who has been honing skills for only the past six or seven years, Posley creates works of art in response to mass shootings around the country and then visits those places and donates the paintings to the communities suffering in the aftermath. For his latest project, he created a-piece titled “Broken But Not Bent” in response to the five Dallas Texas police officer that were killed after being gunned down by a sniper.

“Art is a great way to bring about healing to the families and all those involved in these tragedies. What’s from the heart reaches the heart,” Posley said recently while sitting among some of his works at New Cannanland Church on Clinton Street in Joliet, where he is also the Senior Pastor.

He and his brother traveled to Dallas on Aug. 16 to hand deliver the painting to the police chief and other city officials. The piece now hangs in the office of the Dallas police chief, Posley said.

Trees are the main theme for most of Posely’s paintings, he said, because they represent life and family.

It all started in 2012 after the mass shootings at Sandy Hook Elementary, in Newtown Conn. On Dec. 14 of that that year, 20 children ages 7 and younger and six female educators were killed when Adam Lanza, went on a shooting spree at the school.

Posley responded to the tragedy by creating a painting he titled “The Tree of Life,” with each of the branches on the tree representing the victims. That following year, Posley took his painting to Newtown and donated it to the people of the community. It became one of the 50,000 pieces donated to the Healing Newtown Arts Space gallery, a gallery that opened in Newtown after the tragedy.

That experience made Posley see that his art is more than just painting on a canvas. They have a deeper meaning and, he said, he believes the paintings he creates can bring about healing.

“Somehow, someway a greater purpose came to light,” Posley said. “It wasn’t just about the art… It was to help a city, help a community and help a nation.”

The Newtown experience helped Posley see himself as he also deals with a child with a mental condition. Adam Lanza, the shooter in the Newtown massacre, had reportedly suffered from mental illness. The experience, he added, made him see that in order to help his son heal and help himself he had to get out of himself and help others.

And, since then, when other national tragedies have occurred involving gun violence, Posley has responded in the same manner – creating and donating works of art to bring about healing. He has taken brush to canvas in memory of other gunned down and killed – such as Trayvon Martin the 12-year-old boy from Florida, who was fatally shot by a neighborhood watch volunteer, and 15-year-old Hadiya Zaymara Pendleton, who was shot and killed on Jan. 29, 2013 while standing in a park in Chicago with friends shortly after returning home from Washington D.C. to see the inauguration of President Barack Obama. Posley also created a piece in response to 2015 shooting of nine people in a church in South Carolina, among others.

Pastor Posley is involving others in the Joliet community in his work. He recently invited members of the Joliet City Council and local legislators and other local dignitaries to his church to sign two of his latest tree-themed paintings before he brings them to Louisiana and Minnesota where other shooting deaths have occurred.

Posley said he also is working to stem gun violence at the local level. “I’ve been working hand-in-hand with the Stop the Gun Violence Epidemic campaign and participating in prayer walks here in Joliet,” he said.