Mooyah restaurant franchise in Joliet to hold fundraiser for charity 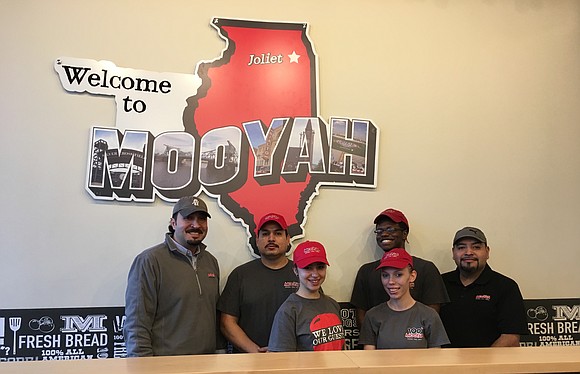 Mooyah Burgers, Fries & Shakes staff in Joliet. The franchise will be collecting food donations and giving part of its proceeds during the weekend of December 9-11 to two local charities for the holidays. Photo by Alex Ortiz

JOLIET - The Mooyah Burgers, Fries & Shakes franchise in Joliet will be celebrating its one-year anniversary with a fundraiser and food drive for two local charities on the weekend of December 9-11.

The franchise owner, Kal Mohamed says he aims to create a family environment along with his fresh, quality food and service. His restaurant has participated in numerous fundraisers for local causes like school programs and sports teams. For the holidays, he really wanted to help those in need.

The two charities that will benefit from the fundraising are Morning Star Mission and Catholic Charities, which both provide for homeless residents and families in need, especially during the holiday season. Of the proceeds made during the weekend, 20 percent will be donated to the charities. Patrons can also donate non-perishable food items staring next week until the week of Christmas, which will be given to the charities as well.

The charities provide numerous services and resources including free meals, basic needs like clothes, toiletries, school supplies, healthcare services, shelter, counseling and much more. In the case of Morning Star Mission, they serve about 400 families in the Joliet area.

“You have to be thankful and grateful for what you have and you have to help out people who need help,” Mohamed said. “And that’s something that we personally have in our culture and our brand and we want to give back to the community.”

In 2016, Mooyah was ranked No. 38 in Fast Casual Magazine’s annual Top 100 Movers and Shakers list. For more information on the charities, how to donate or volunteer, you can visit catholiccharitiesjoliet.org and morningstarmission.org.