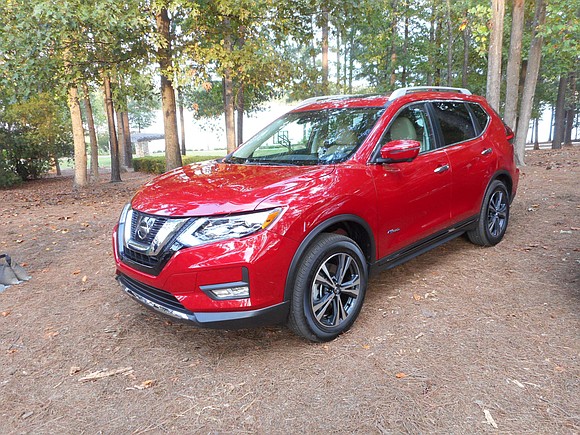 Nissan expects the Rogue, its midsize crossover vehicle, to become the company’s top seller soon. And to give it a push, the automaker restyled it and added a hybrid to the lineup.

In the front, the 2017 Nissan Rogue got a new front fascia, integrated fog lamps, bumper and it got Nissan’s signature V-Motion grille. What’s more, the LED daytime running lights were revamped.

There was a new bumper in the rear too. LED boomerang taillights were added and new chrome trim side door moldings were included in the restyle. The Rogue can be equipped with 19-inch aluminum alloy wheels.

Engineers have implemented a couple of good ideas. The rear doors open wide, 77 degrees making it easier to get in and out of the 2017 Rogue. An automatic opening tailgate was added. Standard on the SL trim line and available on the SV trim line, we stuck our foot under the rear bumper and the tailgate opened. With the push of a button, it closed.

The sideview mirrors were heated and body-colored. They also had optional integrated turn signals. There was a rear spoiler, tinted glass and roof rails. The panoramic roof’s front panel would slide under the fixed rear panel when opened.

There was a leather-booted sport-mode shifter, memory for the driver’s seat and mirror, and remote engine start. The interior featured new door and instrument panel finishes, new shift knob design, revised center console and console lid and new seat fabric. Also new was a Platinum Reserve Interior Package (available on Rogue SL) highlighted by premium tan leather-appointed seats with special quilted leather inserts. We didn’t get a chance to road test a Rogue with this package.

But no matter the trim package, every 2017 Nissan Rogue was powered by a 2.5-liter four-cylinder engine that made 170 horsepower and 175 pound-feet of torque. Mated to what Nissan has branded an Xtronic continuously variable transmission with standard sport and eco modes.