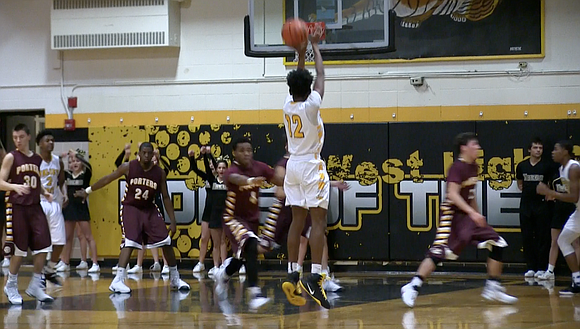 Joliet West forward Charles McKinney hits a three pointer during his team's 74-45 win over Lockport on Tuesday Dec. 13 to remain undefeated at 8-0. Photo by Alex Ortiz

JOLIET - The Joliet West Tigers (8-0) continued their roll to start the season with a 74-45 win against Lockport at home on Tuesday night.

Early on, Joliet West missed a couple of good chances and turned the ball over uncharacteristically, but still led 20-10 in the first quarter.

Next up, the Tigers take on Plainfield South in conference play on Friday, Dec. 16 at 6:30.

In other news, Joliet West also earned the No. 3 seed for the Pontiac Holiday Tournament Dec. 28-30 behind Chicago teams Curie and Simeon in a loaded field.