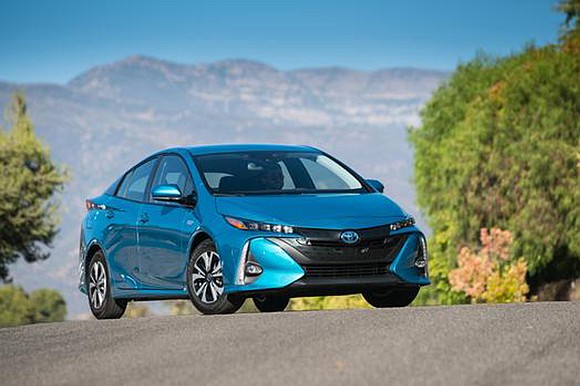 Toyota is responsible for almost three fourths of the hybrids sold in the U.S. So what you do when you want to keep what you’ve got? Make a better hybrid. That’s what the automaker has done with the 2017 Toyota Prius Prime.

The new Prius Prime was a half-foot longer, just a little bit wider and a tad lower than the model it replaced. Gone is the smooth jellybean look, replaced by an edgy futuristic design, especially in the front.

The Prius Prime had a 0.25 coefficient that Toyota claimed is among the lowest for current production sedans. Automatic grille shutters help reduce drag by closing when airflow to the radiator is not needed. Another detail, the 15-inch aluminum alloy wheels featured aerodynamic covers were painted in a two-tone scheme.

Using an onboard camera, the automatic high beams detect approaching vehicles or a vehicle traveling ahead and also measures the surrounding environment’s light, such as street light brightness, and adjusts accordingly.

In the rear was a full-width LED combination lamp panel that left a nighttime signature, with a shape that follows the contour of the spoiler and the double-wave window. Unique to the 2017 Prius Prime is a full-width aero glass panel below the rear spoiler, plus a standard backup camera.

That was in the press material. All of our test -driving was done during daylight hours. Toyota had brought five 2017 models here for us to sample but we thought we’d devote a full column to the Prius Prime.

The most important thing about any hybrid is the powertrain. And Toyota has redone the Prius Prime’s. As with most hybrids, the Prime combines a gasoline engine, electric motors and runs their power through a continuously variable transmission.

The new lithium-ion battery pack used in the Prius Prime is 8.8Wh, twice as big as the battery in the old Prius Prime. What’s more, Toyota said that using an ordinary 120 Volt outlet with the cable that comes with the car, the battery can be charged in five and a half hours. Use a commercial charging station or 240 Volt outlet at home and the job will be done in a little more than 2 hours.

In other words, what they’re saying is that you don’t have to go through the expense of installing a 240 Volt outlet in your home or garage. To help extend EV driving range, the hybrid system used what Toyota has branded as a dual motor drive. A new one-way clutch engaged both the generator (MG1) and electric drive motor (MG2) for drive force. It is the first time the MG1 generator has been used to put power to the pavement.