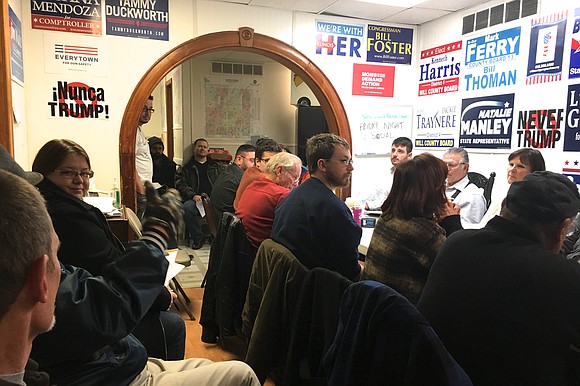 The Will County Progressives hold one of their "Friday Night Socials" in Joliet on December 9. Photo by Alex Ortiz

Fellow founding member Larry Gilman does not shy away from having healthy discussions with people who disagree with him. Just this past summer, while working at the Democratic booth at the county fair, an 18-year-old man “walked up and said ‘Yay Trump!’”

“Instead of going negative, I tried to engage him to try to ask him why did he feel Trump was the answer versus Clinton,” Gilman said. “And my approach to him was to try to understand where he was coming from. Try to give him just enough information to not overwhelm him but maybe try to challenge his viewpoints.”

Gilman said he felt confident after about a 20-minute discussion that he may have not changed the young man’s mind, but that he opened his mind enough to engage with his differing viewpoint.

But Serbin and Gilman are also very concerned about what the 2016 election means for the future.

Serbin says her 7-year-old daughter catches a little heat for talking politics at school from time to time. But Serbin has made it a point to teach her that all people deserve respect, and her daughter implemented that lesson in the classroom. One day during school, a classmate said that he was happy Trump was president because “Mexicans were trying to kill us.”

“That infuriated my 7-year-old daughter,” Serbin said. “Who fired off a series of statements that, while very cutting, were not inaccurate, such as ‘It does not matter what color your skin is. If you’re a jerk, you’re a jerk all the way through.’

"Dump Trump" t-shirt sold by the Will County Progressives.

And this is the reason why they put in so many hours learning about local government, getting people out to vote and advocating on behalf of their progressive values right in their communities.

But might there be a discrepancy between former Bernie Sanders supporters working within the system?

Serbin, who describes herself as a “pragmatic idealist,” doesn’t think so. She says that the community is best served when those politically involved swing for the fences, and while it rarely will work 100 percent the first time, little bits of progress is progress nonetheless.

“Change, as it’s been pointed out to us, is slow and incremental,” Serbin said. “It’s not sexy. It’s not fast. It’s not now. It’s very slow.”