All persons are presumed innocent until proven guilty.

ACOSTA, VIANEY, 36, of 1418 GLENWOOD AVE., arrested and charged with 2 counts of FORGERY and DECEPTIVE PRACTICEs as well as UNAUTHORIZED POSSESSION OF A PRESCRIPTION FORM.

WILLIAMS, AVERY, 34, of 1860 MARLBORO LN. in CREST HILL, arrested and charged with criminal trespass to vehicle.

ZAVALA, VICTOR JR., 26, of 663ABE, arrested and charged with criminal damage to property. 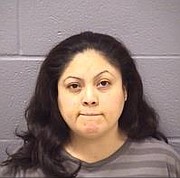 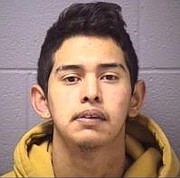 4th A wallet was taken from a purse while the victim was shopping on the 700 block of E. Boughton Rd. at 10:45 am. Several unauthorized purchases were made with the victim’s credit cards at local stores. (16-7071)

6th Officers responded to Kohl’s, 1138 W. Boughton Rd., for the report of a retail theft. Suspect took numerous items from display and exited the store at 4:00 pm without rendering payment. Loss valued at $210. (16-7101)

8th Officers responded to the 100 block of Enclave Cir. for the report of a suspicious subject in a vehicle with a flashlight. The victim yelled out and the subject ran off at 1:19 am. (16-7138)

10th Officers were called to Lot G of Fernwood Dr. for the report of criminal damage to property. Suspect kicked in the front door of the residence, cut couch cushions and broke two glass tables at 2:40 am. (16-7173)