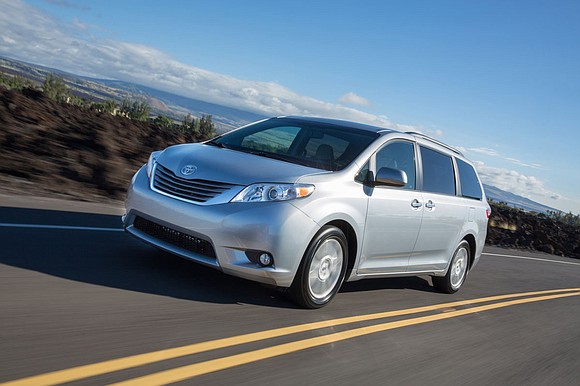 OJAI, Calif., – W came here to test a bevy of 2017 Toyota products. We had the Prius Prime, the 86, the Corolla, the Highlander and the Sienna. We dealt with the Prius Prime in another column so that leaves the other four. First up was the 86.

In case you hadn’t heard, Toyota has discontinued its Scion brand and is rebranding the products as Toyotas. The first car we got our hands on was the Scion FR-S but now it is the Toyota 86.

This was way more than a name change. Yes, the 86 was still low, long and it had a wide stance, just like its predecessor. But the car had been greatly improved. It had standard LED front headlamps, daylight running lights, and a new fog lamp bezel and revised bumper. The rear sported LED tail lamps too and a more sculpted bumper design with integrated aerodynamic diffuser.

Soft touch materials were used in the interior and of course 86 logos were used on the car. Silver stitching was used inside and the bucket seats in the 2+2 coupe were comfortable. The 86 performed well on the twisting two lane roads through the hills and mountains surrounding this valley.

Powered by an aluminum alloy 2.0-liter boxer four-cylinder engine, there is a six-speed manual transmission and the six-speed automatic. The manual made 205 horsepower while the automatic generated 200 horsepower. We had the automatic and it made 151 pound-feet of torque. It got and an estimated 24 mpg in the city and 32 mpg on the highway.

The Toyota 86 is a classic sports cart. It was light, 2,815 lbs., had a great power to weight ratio and it was highly maneuverable. That is a long winded way of saying it was fun to drive. Prices for our test vehicle start at $27,840.

Next was the 2017 Toyota Highlander. The automaker tweaked the crossover which can be equipped with three rows of seats, from stem to stern. Under the hood was a retuned 3.5-liter V6 that made a robust 295 horsepower and 263 pound-feet of torque.

Mated to a new eight speed- automatic transmission, the all-wheel-drive model of the 2017 Toyota Highlander had a fuel efficiency rating of 20 mpg in the city and 27 mpg on the highway. That was a big jump from the 2016 model.

The 2.7-liter four-cylinder engine made 185 horsepower and 184 pound-feet of torque. It was mated to a six-speed automatic and in front wheel configuration got 20 mpg in the city and 24 mpg on the highway. They didn’t bring any four cylinders here, nor were there any trailers to check out the towing prowess of the Highlander. Toyota said it could pull up to 5,000 lbs.

The Bird’s Eye View camera system had four cameras that assisted during parallel parking. The system also provided a 360 degree view around the vehicle helping the driver to see obstacles.

We didn’t stray too far from the staging area because we really wanted to get into the Toyota Highland Hybrid. So we confined our test drive of the gas powered Highlander to city streets. The cabin was spacious, quiet, comfortable, and open. We didn’t get the feeling that we were hemmed in by a high center stack or short side windows.

After waiting most the afternoon to get into the Toyota Highlander Hybrid, we took it on a long loop that included U.S. HWY 101. The hybrid system produced 301 total horsepower so there was plenty of oomph to deal with the speeding traffic here. It got 30 mpg in the city, 28 mpg on the highway and 29 mpg combined. And all the automaker’s hybrids are equipped with Toyota’s on demand all-wheel-drive system that employed a second, independent electric motor to drive the rear wheels when needed for optimal traction.

If not for the Corolla, it’s probable that Toyota would not have survived in this market. The compact car was small, it was cheap and it was a much needed gas sipper when the price of petrol was a sky-high 25 cents per gallon. What’s more the Corolla was dependable.

Since it was first built in 1966, 43 million have been sold across the globe. The car was introduced in the U.S. market in 1968. To mark its 50th anniversary, a special edition model was created with special paint and trim color in the SE model with moonroof, smart key and Entune Audio Plus app suite. Alas, the automaker didn’t bring any here either.

Still for 2017, the regular Toyota Corolla was restyled. It got a new front grille and LED headlamps. The L, LE and LE Eco models gained Bi-LED headlamps, while they are standard on the SE, XSE and XLE models. The base L model gained a back-up camera. That feature is now standard across the Corolla line.

Upgraded fabric was added to the interior. There was a choice in interior schemes in the LE between Almond, Ash/Dark Gray or Black/Brown color schemes, or bold sportiness with Softex-trimmed sport seats with Vivid Blue, Orange Zest, and Black premium fabric inserts in the SE. A redesigned climate control panel and circular air vents added a sophisticated touch.

The Corolla was a good looking small car. The suspension was great, cornering was good and the steering was accurate. It held a selected track well. The car was also quiet; there was very little wind or road noise. And it got over the hills and mountains here without working the engine hard.

Toyota continues to make incremental improvements to its Sienna minivan. For 2017, the 3.5-liter V6 has been tweaked to produce 296 horsepower and 263 pound-feet of torque. The engine was mated to an eight-speed automatic transmission. Toyota said the Sienna accelerated quicker and it had a stronger passing performance. And it remains the only minivan on the market with available all-wheel-drive.

And yes, the minivan was quite spry on its treads. We didn’t take a long test drive but we found the 2017 Sienna comfortable, it handled well and it didn’t drive like a big or little bus. It was the ultimate utilitarian vehicle. The Sienna could carry seven or eight people. And you can take out the second and third row seats and create 150 cubic feet of cargo space.

The Sienna was equipped with electric power steering, uni-body construction, an anti-vibrations sub-frame. MacPherson front suspension and torsion beam rear suspensions gave the minivan a solid ride. There was some road feel in the steering and there was little dipping in the corners. Still, it was a firm and level ride.

The dashboard grouped climate control, gearshift and multimedia buttons. The tri-sync switch for air conditioning lets the driver manage temperatures in three climate zones. The driver’s seat center armrest could be adjusted to numerous positions and the minivan can be equipped with a heated steering wheel depending on the trim level. There are five: L, LE, SE, XLE and Limited.

And for parents, the standard conversation mirror integrated into the overhead console gives the Sienna driver an all-encompassing view of rear passengers. The available Driver Easy Speak feature, meanwhile, essentially gives the driver a built-in public address system. The system projects the driver’s voice through the audio system’s rear speakers. We didn’t try it.

An available dual view entertainment center uses two screens within a seamless 16.4-inch widescreen image and is meant to keep disputes between kids about what to watch at a minimum. The system has Blu-Ray capability, and HDMI jack and an SDXC card reader that can play 10 different audio and video formats. There are wireless headphones. And a passenger in any seat can operate the entertainment system by remote control.

Prices start at $29,750 for the 2017 Sienna L V6 6ECT 7 PASS. And none of the aforementioned base prices include freight or handling charges.