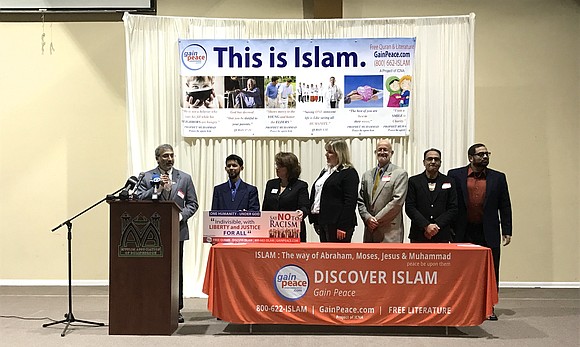 Members of the Muslim Association of Bolingbrook, Gain Peace and other community members participate in press conference to launch a campaign to end discrimination in response to the recent rise in hate crimes against Muslims. Photo by Alex Ortiz

BOLINGBROOK - As part of a new campaign started by Gain Peace, a Muslim group based in Chicago, members of the Muslim Association of Bolingbrook (MAB) are attempting to build alliances to “stand up against discrimination, hate attacks, and racism against any American.”

MAB and Gain Peace members, Chicago-based media, as well as Muslim and non-Muslim members of Bolingbrook and surrounding communities attended a press conference on Thursday at a Mosque in Bolingbrook to unveil the campaign. This included billboard messages that are going to be posted all over the Chicagoland area as well as open houses at mosques and a social media strategy to reach people all over the country.

“We want to promote the peace and the harmony and especially the unity,” Dr. Sabeel Ahmed, Director of Gain Peace, said.

The campaign comes about because of a recent spike in hate crimes against Muslims, as well as other religious, ethnic and racial minorities. In the latest FBI annual hate crime report released last month, there was a 67 percent rise in reported hate crimes between 2014 and 2015. A hate crime, according to the FBI, is a “criminal offense against a person or property motivated in whole or in part by an offender’s bias against a race, religion, disability, sexual orientation, ethnicity, gender, or gender identity.”

On the billboards read a part of the Pledge of Allegiance, “One humanity - under God ‘Indivisible with liberty and justice for all’” and it goes on to read “Say NO to racism.” It also provided contact information for Gain Peace whose members make themselves available to answer any questions people have about Islam in an effort to educate non-Muslims.

Some were on hand to share their stories and their concerns with the rise in hate crimes like Kiran Malik, a mother of three girls and the Youth Community Coordinator for Gain Peace.

“I’m afraid,” she said. “I’m afraid of being looked at and judged for what I wear and I’m afraid of how verbally and physically I can be attacked as I have been verbally attacked in the past in front of my children in public.”

She is concerned that just by wearing her hijab, that could make her a target even though it is simply a sign of her devotion to her religion and is a personal choice she has made.

“Sometimes I think if I take of the hijab, or if I stop speaking my native language in public, or if I stop practicing my religion, or if I stop doing anything that makes me different, will I be safe?” Malik said. “This is who I am.”

As part of this outreach initiative, Muslim community members want anyone interested in learning more about Islam to come to a local mosque, especially during one of their open houses. The mosque in Bolingbrook will be holding an open house in February.