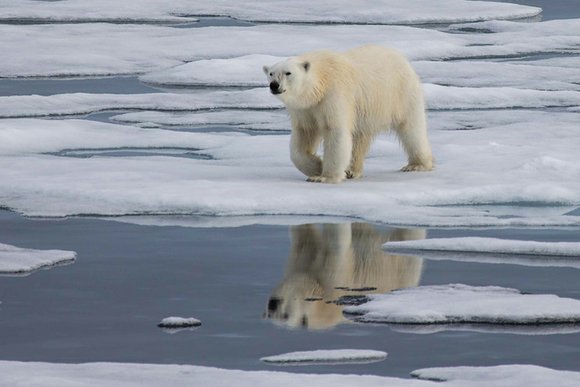 The Arctic is an “indicator region” for the rest of the planet: small differences in temperature there can have profound ecosystem impacts — and can give us a better idea of the types of problems we can all expect down the road. Credit: Smudge 9000, FlickrCC.

Dear EarthTalk: Why is the Arctic such a crucial area to focus on in efforts to stem global warming?

The image of a polar bear standing on a shrinking iceberg has become one of the most iconic symbols of global warming, yet few of us realize just how important the Arctic’s ice is, wherever we may live on the earth. Researchers consider the Arctic to be an “indicator region” for the rest of the planet, given that even small differences in temperature there can have profound ecosystem impacts and can give us a better idea of the types of problems we can all expect down the road.

Of course, the effects of global warming have been under scrutiny in the Arctic for decades already. Since 1979, the extent of the Arctic’s permanent ice cap has shrunk by upwards of 20 percent. Even worse, the remaining ice has thinned by as much as two-thirds in some parts of the Arctic. Recent models suggest this ice loss will only accelerate in the next several years due to a global warming feedback loop called the “albedo effect,” whereby less ice means less reflection of the sun’s radiation back into space and thus more warming at the Earth’s surface. And not only is the ice shrinking—parts of the ice cap are also rupturing: The Ward Hunt Ice Shelf, the largest block of ice in the Arctic and intact for some 3,000 years, finally cracked in 2000, and within two years split all the way through.

These changes up north are already starting to have ripple effects elsewhere. For starters, the entire Arctic ecosystem is being forced to shift with the changing climate. Animals like polar bears, whales and seals are changing migration patterns, in turn impacting native people who depend on them for sustenance. Meanwhile, other organisms are overpopulating, given all the new habitat opening up. Rising temperatures have allowed the spruce bark beetle to add an extra reproduction cycle each year. As a result the pesky little beetles decimated 3.4 million acres of Alaska’s forests over just 10 years.

And then there’s the issue of sea level rise. Thanks in large part to melting Arctic glaciers, sea level is expected to rise some three feet on average around the world in the next century, flooding over 22,000 square miles in the United States alone. This pressing issue threatens island nations especially. Countries like the Maldives, precariously perched just six feet above sea level, are as concerned as anyone about melting glaciers in the Arctic. And warming in the Arctic also affects weather patterns vital for food production all over the world. Cold water from the melting ice could also potentially halt the Gulf Stream, which brings warm weather to Europe. This would result in a steep drop in temperature for much of northwestern Europe and would affect weather patterns far beyond.

While it may seem futile for us to try to stop Arctic ice melting, we do in fact have the power. We can all work to reduce our carbon footprints by flying and driving less, turning down (or off) the heat or air conditioning, speaking up to our elected officials, and even divesting from companies that support the continued development of fossil fuels.

EarthTalk® is produced by Doug Moss & Roddy Scheer and is a registered trademark of Earth Action Network Inc. View past columns at: www.earthtalk.org. Or e-mail us your question: earthtalk@emagazine.com.