Thomas Toyota moving to Romeoville and out of Joliet 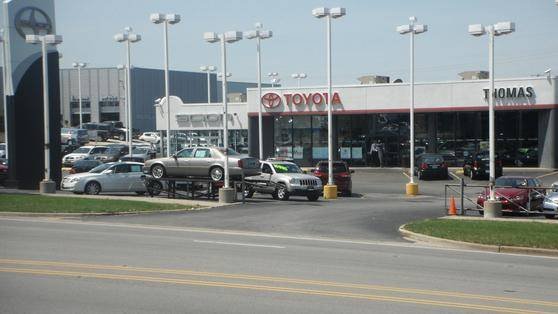 Joliet’s loss is Romeoville’s gain as Thomas Toyota prepares to move from its Larkin Avenue location to a new home on Weber Rd.

The new dealership, which was announced at Romeoville’s State of the Village address on Feb. 11, will be located near the intersection of Weber Road and Grand Haven Circle.

Steve Jones, economic development director for Joliet, confirmed that the dealership would be moving from the city once the new location is completed.

“They are planning to relocate the existing Thomas Toyota that’s in Joliet,” said Jones who said he spoke with owner Jim Thomas earlier in the week.

Jones also confirmed that a Nissan dealership at the site would stay put.

“We’re pleased that the Nissan is staying,” said Jones

Jones said that Thomas had approached the city about a year ago letting them know that Toyota’s corporate ownership was looking for a location closer to the interstate and farther north which he said was most likely the deciding factor for the move.

“The pressures of where Toyota Corporate wanted the dealership to locate had a lot to do with his decision to go to this location, I believe,” said Jones.

Jones said he couldn’t confirm how long the current dealership has been at 1437 N. Larkin Ave. location but said that an agreement on file dates back 15 years.

Jones said that the city would have discussions with Thomas about whether Nissan will expand on the site “or if some alternate nameplate would be available for that location.”

He said that Thomas, who owns the land, will “ultimately decide what happens with the property.”

The confirmation of the move follows a recent incentive plan approval for the new Romeoville location.

The village has also agreed to cap its building permit fee at $10,000 and engineering and review fees at $25,000 for the project.

Employees of the dealership will also receive free membership to the village’s recreation center at 900 Romeo Rd.

In a separate arrangement, the dealership has also agreed to a 10-year court sponsorship for the village’s athletic and events center for $5,000 per year.

The site of the dealership was originally slated to be used as a medical campus said Noak. The change in use means that it will now generate sales tax revenue for the village even in the initial years of the incentive agreement.

Noak said he hoped that the dealership would “establish a pattern” to attract other dealerships along the Weber Road corridor.

“It’s been a long time since Romeoville has had a car dealership,” said Noak.

Trustee Sue Micklevitz said she was initially concerned about the size of the tax incentive being offered for the dealership.

“It did give me a little pause,” said Micklevitz who was concerned that the village be “mindful of not giving away too much” in its quest to attract the car dealer.

She said that she was reassured by the fact that the village wouldn’t be “writing a check” for the incentive from TIF or other funds.