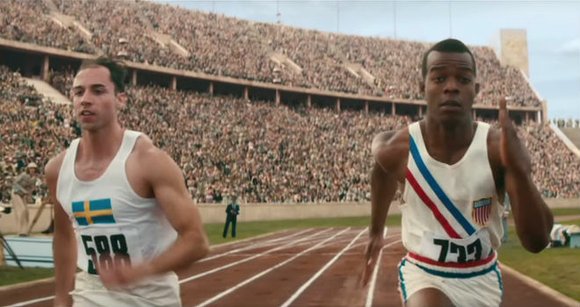 Jesse Owens (Stephan James) is famous for winning four gold medals at the 1936 Olympics staged in Berlin. The in track and field events in which he competed included the 100 meter dash, the 200 meter dash, the long jump and the 4 x 100 meter relay race.

What makes Owens' feat remarkable is that he had to overcome not only racism at home but the prejudice he encountered in Germany which had embraced Nazi notions about whites being a master race. So, not only did he have to deal with discrimination in the States but prejudice on the part of Adolf Hitler (Adrian Zwicker).

Directed by Stephen Hopkins (Lost in Space), Race is a character-driven biopic, which has much more to offer than an account of Jesse's historic assault on the record books. For, in addition to recreating the tension surrounding each of the contests, the picture devotes considerable time to fleshing out the protagonist's personality.

As the film unfolds, we learn about Jesse's humble roots in Cleveland, and that he was the first of his family's ten children to attend college. When he left for Ohio State, he already had a baby (Yvanna-Rose Leblanc) with Ruth Solomon (Shanice Banton), the childhood sweetheart he would eventually wed and remain married to until his death in 1980.

At the university, Jesse forged a close relationship with his track coach, Larry Snyder (Jason Sudeikis), who also served as something of a surrogate father. And when his confidence was being undermined by bigoted officials on the U.S. Olympic Committee, Snyder decided to pay his own way to accompany his promising protege to the games in Berlin.

There, Jesse was shaken to be greeted with the N-word. He was equally shocked by see signs in stores declaring "No Jews or dogs allowed." Nevertheless, he managed to block out the madness all around him while concentrating on performing in the Olympic stadium to the best of his ability.

Jesse's prevailing over Aryan athletes infuriated Hitler who refused to shake his hand, as was the proper protocol, at least with white gold medal-winners. Despite pressure from the Fuhrer and his henchman Joseph Goebbels (Barnaby Metschurat) to follow suit in the snub, German long jumper Carl "Luz' Long (David Cross) went out of his way to embrace the champion ostracized on account of his skin color. (Postscript: The two remained friends until Carl perished while fighting on the front lines in World War II).

Regrettably, Jesse's reception back home wasn't much better, given how the White House never publicly acknowledged his remarkable achievement. A very inspiring, long overdue tribute to a great patriot and African-American icon.

In English and German with subtitles