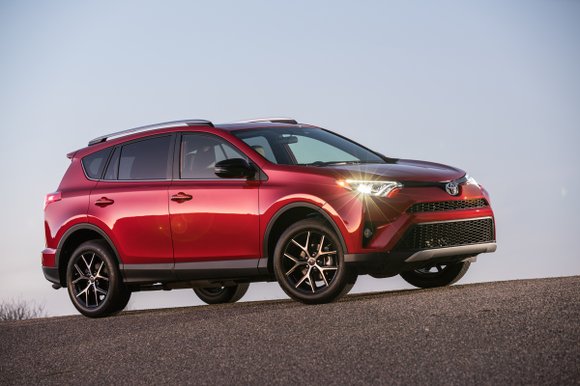 Toyota’s RAV4 almost singlehandedly invented the small sport utility market when it came to America in 1996. Since then, the automaker has sold some 2.4 million copies and amazingly 80 percent of them are still on the road.

What’s better is that the small utility vehicle market is hot. Sales have consistently gone up and show no signs of slowing down. In its effort to give consumers fresh product, Toyota has revamped the RAV4 for its normal mid-life cycle change. But this is more than a twist here and a tweak there.

New front and rear skid plates are on almost every model, there were new wheel designs and a shark fin antenna is now standard across the model range. And Toyota also added three new colors. All-wheel-drive is standard on all RAV4s. But the big news of the mid-life cycle change is that Toyota has added a hybrid to the RAV4’s offerings to broaden its customer base.

The 2016 Toyota RAV4 Hybrid combines a 2.5-liter Atkinson cycle four cylinder engine that makes 194 horsepower and 206 pound-feet of torque. It is mated to a continuously variable transmission. It has two electric motors one turns the front axle and the other will spin the rear axle.

Although all RAV4s have all-wheel-drive, on dry pavement they are essentially front-wheel-drive vehicles. When wheel slippage is detected, torque is sent to the rear wheels.

Regenerative baking turns one of the hybrid’s electric motors into a generator to trap kinetic energy and store it in the RAV4’s nickel-metal hydride battery which is housed in the floor under the second row seats.

The 2016 Toyota RAV4 Hybrid will get from a standstill to 60 mph in 8.1 seconds. That is almost one second quicker than its gasoline powered counterpart can do it. Powered by a 2.5-liter four cylinder engine that makes 176 horsepower and 172 pound-feet of torque, this engine is mated to a six-speed automatic transmission.

Front and rear parking sonar, a smart key and a bird’s eye view camera with a perimeter scan which provided a 360 degree rotating view around the RAV4 were also in the safety mix.

The interior layout didn’t change much but the material was upgraded. Soft touch material was used on the lower dash and on the doors. With all-wheel-drive intelligence readout you can see how much torque is being sent to the rear wheels.

The chassis was improved and the RAV4 now has digressive shock absorbers at all four corners. There was a Macpherson strut suspension in the front and a double wishbone set up in the rear. The steering was tightened to give a more direct feel and the brakes were updated for a more linear feel.

NVH was lessened by the use of improved floor panels, door padding and seals. The test vehicle was pretty quiet and response to driver input was pretty quick. The 2016 RAV4 got through a slalom and braking test quite nicely.

Of course, the 2016 RAV4 can be equipped with Entune, Toyota’s infotainment system. There was a navigation system, satellite radio, voice controls and Bluetooth. Three are eight gasoline trim lines. The RAV4 two-wheel-drive LE starts at $24,350. Prices range up to $32,910 for an AWD LTD. The hybrid starts ate $28,370 for the XLE and $33,610 for the LTD. None of the prices include the $900 freight charge.

The 2016 RAV4 handled well, it was quiet, and the interior was comfortable and pleasing. All-in-all, it was a nice driving a vehicle.