Will County Board finalizing financial plan for new courthouse 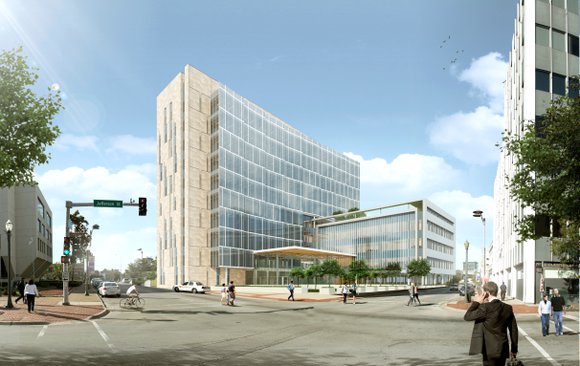 An artist's rendition of the new Will County Court building.

The Will County Board today continued discussions about a financing plan to move forward with several major capital improvement projects, including a new courthouse, sheriff's office, and health department building, and the allocation of cash reserves for Weber Road reconstruction. The plan calls for bonding $225 million, using dedicated revenue streams, and getting shovels in the ground by next year.

"The Board has come together in a bipartisan fashion to form a fiscally conservative plan to move forward with a Long Range Building Plan to address very important public safety needs," said County Board Speaker Jim Moustis. "This is a significant investment in the future of our county, as we build modern facilities and upgrade our busy roadways, and will pay dividends for a generation to come."

The plan identifies multiple revenue streams to finance the building of the facilities over the next seven to eight years. The plan also ensures significant revenues are still allocated to road projects. Construction on a new sheriff's office building would begin in 2016 and conclude around September 2017. Thereafter, a new courthouse in downtown Joliet would get built and completed by the end of 2019. A satellite courthouse in a location to-be-determined in the northern part of the county is also planned, followed by a new Health Department Building.

"Today was a great example of a true compromise and what working together can achieve," said County Executive Larry Walsh. "It was great to see county board members from both sides of the aisle working together with my staff to help advance a solid financial plan. The plan we have worked together on is a very thoughtful and fiscally responsible approach to meet a variety of county needs."

The current courthouse was built in 1969 when the county's population was 250,000; today the county has nearly 700,000 residents and is projected to grow to 1.2 million over the next 30 years. Its 23 courtrooms lack the necessary space and security and do not meet the minimum standards for safety and security as set by the Illinois Supreme Court. Will County has 35 judges, with one vacancy, who handle 80,000 cases annually.

"This plan is ten years in the making and required a lot of hard work from many people," said Majority Leader Chuck Maher (R-Naperville). "I am proud this plan does not rely on any tax increases, and we fully outlined how to pay for all of these projects before moving ahead."

"I am very excited about the progress we have made together to get these projects off the ground and set in motion an aggressive timeline for completion," added Minority Leader Herb Brooks (D-Joliet). "The residents of Will County deserve modern, safe and adequate public buildings and roadways, and this plan goes a long way to give that to them."

The new courthouse and judicial complex will house between 30 and 36 courtrooms, with a satellite courthouse in the northern portion of the county housing several more. The judicial complex will hold judges and numerous other departments including court clerk, state’s attorney, public defender, court administration, jury commission, court reporters, and the probation department.