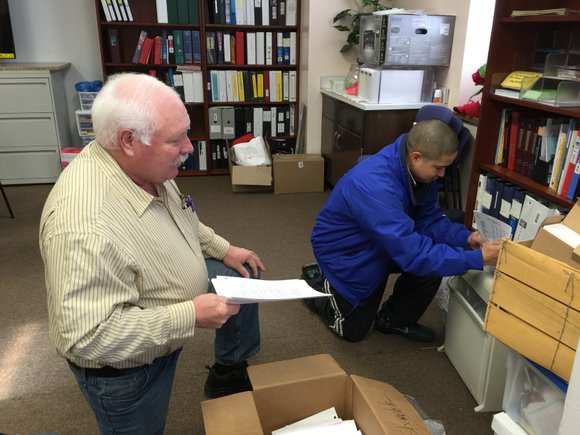 A group of Joliet Job Corps Center students spent Monday giving back to the community in memory of the civil rights leader.

They were part of the Martin Luther King Jr. Day of Service, an event that’s known locally as “A Day On Not A Day Off.” In Joliet, it is organized by a group of non-profit organizations including the United Way and Catholic Charities, among others.

“Job Corps has always been a partner in this event. The students truly understand the meaning of community service,” said R. Dale Evans, one of the organizers.

When they arrived at the center, the group immediately went to work. They removed ceiling tiles, painted, shredded documents and helped organize a large donation to the food pantry.

“It was an amazing day. We got to help out in the community,” Morales said, adding that he was honored to have met the congressman.

Benjamin Brown learned a life lesson during the project.

“Painting is not for me,” he said. “Leave it to the professionals!”

Perhaps most importantly, the group of students knew that they were doing the right thing on the right day.

“I felt that this is what Martin Luther King Jr. would have wanted for us to do today – to help out others, and not just to do something for yourself,” Steve Brown said.

When the students were finished, Elizabeth Nevarez, the executive director of the Spanish Community Center, thanked them for their assistance. “They got so much done. Every job is important,” she said.