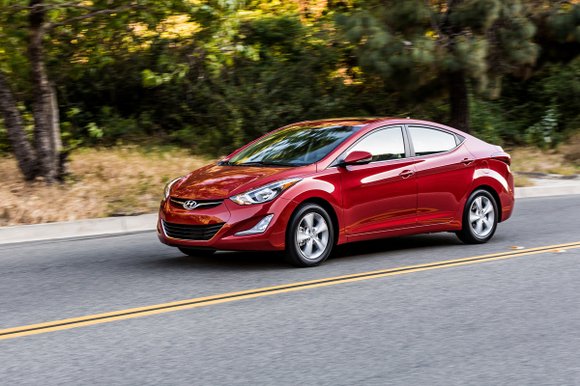 Detroit - Hyundai has a real deal waiting for you in its showrooms. The 2016 Elantra Value Edition won’t be around long. It will be replaced by the 2017 model that goes on sale this spring and we hope the value edition bites the dust with the new model.

That’s not because it is a bad vehicle, rather, anything that has the word “value” in the nameplate does belong in the lineup of a premium nameplate, which is Hyundai’s aspiration. They’ve announced that will make the Genesis a luxury brand unto itself.

But that doesn’t mean that this Hyundai Elantra is not a great value for the consumer. At $20,650 this car had a lot of premium features. There was a backup camera, heated front seats, Bluetooth, a smart key, a moon roof and satellite radio.

Our test car had the 1.8-liter four-cylinder engine that made 145 horsepower and 130 pound-feet of torque. Mated to a six-speed automatic transmission, the car got 29 mpg in the city, 38 mpg on the highway and 32 mpg combined.

Anyway, even with those glitches, the 2016 Hyundai Elantra was a good car. It was comfortable. There was plenty of elbowroom when a 6’7” friend needed a ride. He didn’t have to turn into a contortionist to get in or out of the front seat of the car. The back seats were spacious; there was plenty of hip, head and legroom.

Because the Elantra was a front-wheel-drive sedan there wasn’t much of a rear hump. Thus, a third person could get in the back seat and be relatively comfortable. That’s saying a lot for a compact car.

The car handled well. It had a MacPherson strut front suspension with coil springs and gas shock absorbers. In the rear was a lightweight coupled torsion beam and monotube shock absorbers. The Elantra had a stabilizer bar to reduce body roll. It had electric power steering that provided a little feedback, thus a bit of road feel.

We had cloth seats that were made of quality material. Our interior was all black two tones and is available on other trim lines. The information screen, with most of the controls, was high in the dash. Beneath it was the climate controls. Following was the gearshift and then the cup holders. It was a flowing ergonomically sensible design.

Here’s the really good part about this car. As Hyundai clears out its 2016 Elantra models to make room for the 2017 edition, the price will come down. Our guess is that you’ll be able to get a first-rate car chock full of premium goodies for a very decent price.