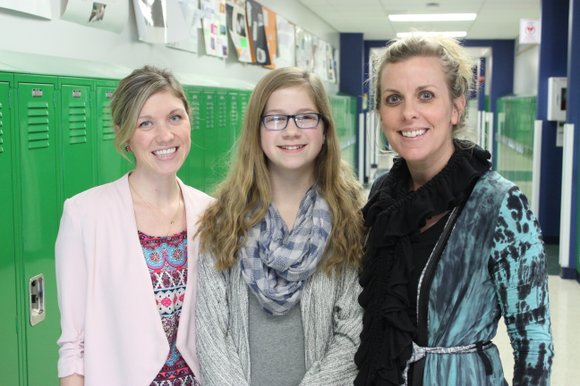 Announcement of the perfect scores came earlier this month when the Illinois State Board of Education released statewide results for individual schools and individual students.

“It was a little more challenging than ISAT but it wasn’t extremely difficult,” Doty said. “I work really hard for my grades so I was really excited that I did well.”

“Corinne strives for perfection in everything she does. She is analytical and never misses an opportunity to grow,” Rush-Levine said. “It is clear she has a passion for learning.”

Doty, who plays volleyball at RHS and also helps coach the Lukancic volleyball squad, has some simple advice on how to succeed on PARCC.

McKeever was “pretty shocked” when she heard about her perfect score.

The honor student, who attended Jamie McGee Elementary school in Bolingbrook for kindergarten and 1st grade before moving to R.C. Hill in Romeoville in 2nd grade for VVSD’s Challenge Program, said she had no idea PARCC was supposed to be significantly more difficult than the old ISATs.

“I thought PARCC was OK,” she said.

“Emily’s accomplishment is a direct result of the involvement of her family, all of her teachers in Valley View, including Jane Addams, and her desire to become a voracious reader and writer,” said Addams Principal Jason Pascavage. “A perfect score doesn’t just happen, it is the product of hard work.”

“I am not surprised at her perfect score, since Emily is always striving for her best. She takes her work seriously and is never satisfied with just OK work,” said Kara Jennings, her 7th grade honors language arts teacher. “I constantly give her opportunities to perform at higher levels and she meets those demands every time.”

Emily’s and Corinne’s scores were just one portion of what was a strong performance on the PARCC assessment for Valley View School District 365U middle and high school students when compared to state averages.

VVSD performed better than the state averages in most subcategories as well.

Among all 24 Will County High Schools, Romeoville High School registered the third highest meets/exceeds rate on both the ELA and math assessments. Bolingbrook High School was 9th on ELA and 7th on math.

The numbers are similar for VVSD 7th and 8th graders with a narrower achievement gap, and better performances by LEP students, students with disabilities and economically disadvantaged students.

“It is good news to hear that our middle school and high school students performed so much better than state averages on this very difficult assessment,” said VVSD Superintendent Dr. James A. Mitchem Jr. “But we still have work to do to achieve our ultimate goal of being one of the state’s top performing districts.”