“Year of Yes” by Shonda Rhimes 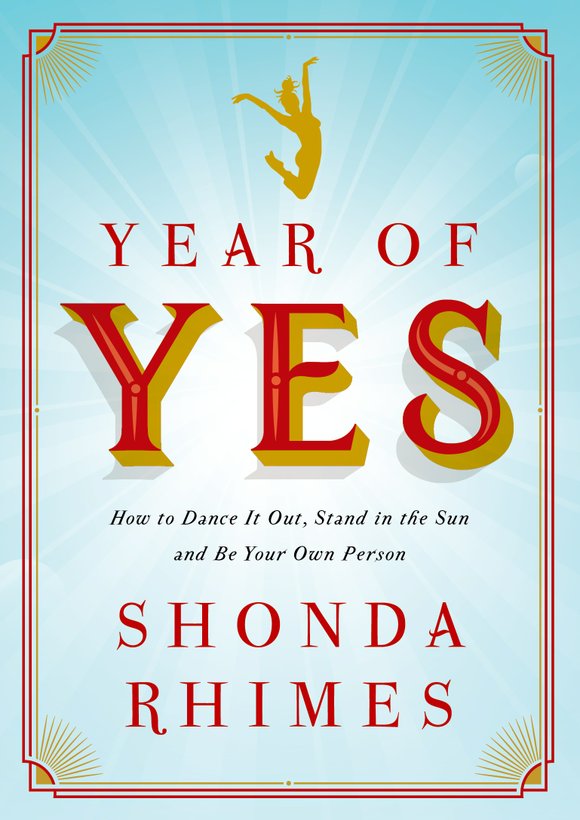 For far too long, you’ve been holding back.

Opportunities have presented themselves, and you’ve passed on them. Chances have leaped in front of you and you skipped them, but you’re not sure why. Some days, you feel like you’re in a ten-foot-deep rut; in the book “Year of Yes” by Shonda Rhimes, you’ll see how to get out.

With two babies and a “tween” at home, several mega-hit productions, and hundreds of employees on her payroll, writer-creator-producer Shonda Rhimes had ample reason for turning down requests. She was busy – and she was also terrified.

Rhimes is a private person, an introvert’s introvert. She hated publicity, interviews, and foofaraw, all of which scared her to the point of panic. “NO” was a much safer word until, on Thanksgiving Day a few years ago, her sister said six words that set Rhimes back on her heels: “’You never say yes to anything.’”

A few days later, after those words sunk in, Rhimes realized how wrong it was that her sister was right. Rhimes was “miserable” and knew that she shouldn’t be, so before she was tempted to let the idea go forever, she texted a friend and vowed to say “YES” to everything scary for one years’ time.

Almost immediately, the “Universe” sent her the first challenge: an invitation to speak at her alma mater’s graduation. Next came an invitation to interview with Jimmy Kimmel and, said Rhimes when it was done, “I didn’t die.”

She said yes to letting go of outdated ideas about motherhood. She became “a big social butterfly” before learning to say yes to play. As an F.O.D. (a “First. Only. Different.”), she’d already said yes to “literally changing the face of television,” but she had to learn to watch the yeses she stuffed in her face… and she said yes to weight loss.

She said yes to those who inspired her.

She said yes to compliments.

She said yes to learning how to appropriately say “no.”

She said yes to singlehood because everybody’s “happy ending” is different. And she said yes because “Saying yes… is courage.”

With all she has on her plate – one high-profile company, three kids, four hit TV shows - you should wonder where author Shonda Rhimes found time to write a book. And you should be glad she did.

With wisdom, wit sharper than a Ginsu knife, and the warmth of a BFF, Rhimes takes readers on her year-plus-long journey, from “It’s NEVER going to get better” to a life of joy, on a road filled with potholes of self-doubt, hairpin curves, and the realization that inviting fears into her life wasn’t going to kill her. Yes, I loved it.

Inspirational? YES, and because her TV creations are dramas, you’ll be surprised and delighted to find that Rhimes is a funny writer, too. She’s also thoughtful, and her experiences will make you think: maybe you do need play. Maybe you do need to learn when “no” is appropriate. Maybe you do need “Year of Yes,” no holding back.

“Year of Yes” by Shonda Rhimes