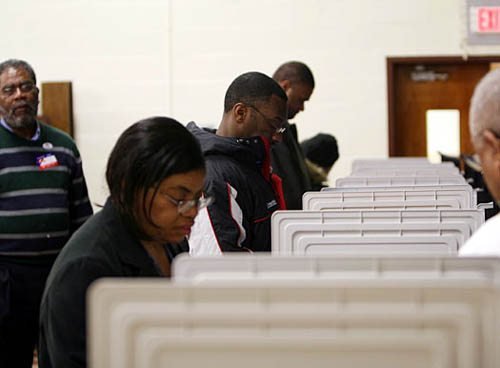 To counter voter suppression schemes and to protect 50

years of racial and social progress in America, the Rainbow PUSH Coalition

(RPC) and the National Association for the Advancement of Colored People

for the Nov. 8 presidential election.

“If we vote our hopes and not our fears we can win this election,” Rev.

Jesse Jackson, founder and president of RPC, said at a news conference

international convention – *A More Perfect Union: From Freedom to Voting

Cornell Brooks, president of the NAACP, joined Rev. Jackson at the news

Brooks said there is “a Machiavellian frenzy of voter suppression” across

the country, but it is especially bad in the South. He said many of the

“We do not have an hour to waste,” Brooks said. “We have less than five

months to protect” 50 years of civil and human rights victories.

Earlier Saturday, Rev. Jackson and Brooks participated in a panel

Mathis, Executive Director of the National Council of Negro Women, and John

of TV One, was the moderator of the discussion that was broadcast live

It was a busy first day at the convention. There was a reunion of the

legendary Operation Breadbasket Orchestra and a performance by noted singer

and actress Melba Moore. There was a youth anti-violence concert in front

of the building, a PUSH Excel national oratorical competition and a room

full of flight simulators and romping, stomping robots, a demonstration of

Robert Starks, Ralph Martire, Executive Director of the Center for Tax and

Budget and economist, Julianne Malveaux, who said, “Voting is not the most

you can do; voting is the least you can do.”

The convention runs through June 29. Convention events, such as the

International Reception and a technology career fair, will be at national