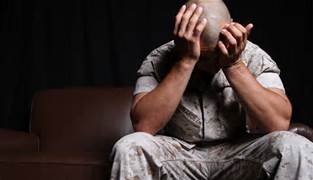 It has become trendy for media reports to compare neighborhoods plagued by gun violence to war zones.

lives and our communities.

Violence claims two victims, the person or people victimized and the community,

which experiences trauma, fear, and stress. Each year in the United States, millions

of residents fall victim to violent crime, which also causes fear and stress to

up in jail are astronomically high, studies show. Studies have also shown a high

According to the National Association for Mental Illness, some 70 percent of youths

ill. These youths are in many cases cut off from mental health care and from their

communities and families; an untold number will be released back into society as

hospitals and courtrooms that ultimately must absorb the burden.

Studies show that, overall, about 8 percent of Americans suffer from PTSD at some

point in their lives. But the rates appear to be much higher in communities - such

veterans. But far fewer treat Americans who suffer from the PTSD that comes with

their zip code. And this kind of PTSD may be affecting even more people.

or flight" in a threatening situation. If someone is exposed to prolonged, repetitive,

or extreme trauma, the amygdala stays in alert mode. And the neurons, the pathways

to this part of the brain, lose their ability to recover.

safe or dangerous. The longer a person stays in the hyper-vigilant mode, the greater

the chance of permanent damage. In a child, damage can be magnified and lead to

For most people, untreated PTSD will not lead to violence. But "there's a subgroup

of people who are at risk, in the wrong place, at the wrong time, of reacting in

a violent way or an aggressive way, that they might not have if they had had their