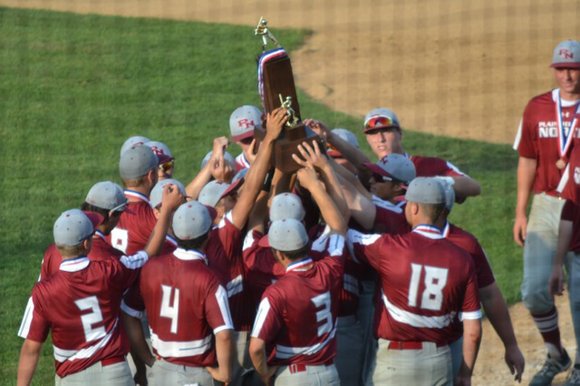 The Plainfield North baseball team (33-5) finished its 2016 season in fourth place in the Class 4A state tournament.

In the semifinal game against Providence Catholic on Friday, the Celtics jumped on the Tigers early but the game remained close through the first few innings. After a rough first inning in which he allowed two quick runs, Plainfield North pitcher Brady Corrigan settled down and was in control for the most part of the early innings.

“They were definitely way more aggressive than any team I’ve faced this year,” Corrigan said. “Usually guys are pretty tentative in the box, but those guys, they came out swinging.”

Catcher Jake Dunham smacked a three-run homerun in the third inning to tie up the game 4-4. But that was most of the offense that the Tigers were able to muster as their batters struck out nine times.

Following a couple of scoreless innings, Providence was able to string together a couple of singles and then gained the lead on a sacrifice fly in the seventh inning. The Celtics added on a couple more runs and the Tigers were unable to answer as the game ended in a 7-4 defeat.

Still, the Tigers were able to play in the third place game on Saturday against St. Charles North. Plainfield North again started out sluggishly on offense. The North Stars scored two runs in the first three innings, but then the Tigers’ offense really got going.

Pitcher Tyler Garrity helped his own cause, as he was able to bat in two runs. Alex Steinbach and Zach Jarosz also batted in runs for a five-run inning. The Tigers seemed to be in control leading by three after four innings. But then St. Charles North answered right back.

“Coming out today I thought I could do what I did last Monday (against St. Laurence),” Garrity said. “But I left a couple of balls off today and they took advantage.”

Two straight North Star batters his RBI doubles and then they managed another two runs later in the four-run fifth inning. This made what would eventually be the final 6-5 margin.

“It’s not the right way,” he said. “It’s not how the tournament’s been set up and all of the sudden we’re going to shortchange kids. That’s not right.”