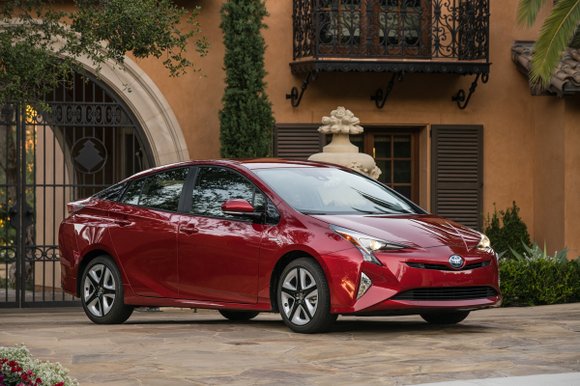 The 2016 Toyota Prius is scary; the hybrid is just that good.

Hybrids are all about fuel savings. With an EPA rating of 54 mpg in the city, 52 mpg on the highway and 52 mpg combined, to say the 2016 Toyota Prius is a gas sipper is an understatement.

Since they are just about indistinguishable, most folks don’t realize that there are six trim lines of the Prius. The difference is equipment. We had the three which had more convenience and technology features.

But the heart of any hybrid is the powertrain. In the case of the new Prius, Toyota outfitted the car with the third generation of what it called its Hybrid Synergy Drive.

The powertrain combined the output of a 1.8-liter Atkinson cycle aluminum four cylinder engine, two electric motor generators through an electronically controlled planetary-type continuously variable transmission (CVT). In other words, the Prius’ powertrain combined two elements that we are not wild about: the hybrid itself and the CVT.

However, in everyday driving the Prius was not bad, actually it was very good. The net 121 horsepower system provided enough oomph for daily driving. We were impressed with the car’s smoothness. It was unbelievably quiet. And the CVT was so silent we really didn’t hear it even under hard acceleration.

Toyota said, “The 2016 Prius uses smaller, lighter hybrid components, including a new lithium-ion hybrid battery that replaces the nickel-metal hydride battery (excluding the Prius Two non-Eco grade) in most models. The new battery’s smaller size and flatter shape allow it to be packaged under the rear seat, rather than beneath the luggage area, yielding more cargo space.”

In the real world, we had the opportunity to get a hefty off the floor model TV stand which meant we had to take it then. We looked outside at the Prius then looked at the stand. All Priuses are hatchbacks so there was not too much doubt that it would fit in the hatch opening but would it fit in the car?

After all, we’re talking about a piece of furniture that was 60X22X20. We folded down the rear seats. Our only complaint was that the front passenger seat didn’t fold all the way down, it went maybe one third of the way down. Still, we slid this hunk of furniture into the car all the way up to the back of the front passenger seat and there was just enough room to close the hatch. That impressed us and it impressed the guys who helped put the stand in the new Prius.

This Toyota hybrid was improved in every way. We still remember the launch program and the difference between the new Prius and the old Prius on the pavement of an old air force base where Toyota had set up a slalom course and some other road tests.

What struck us about the car was the difference between how the new Prius and the model it replaced handled the slalom test. Handling on the new Prius was significantly better than that of the car it replaced.

So was the suspension. The surface was ruddy and full of small unplugged holes. The old Prius kind of rumbled over it while the new model smoothed the surface out. This test drive proved that was no fluke.

The shape of the new Prius has been refined. That hump in the roof has been lowered. The new car is also longer, lower and wider.Toyota said it provided a more planted stance. We don’t know about that but the car did feel awfully solid on the road.

Our test car had a cloth interior. The Prius had a wraparound dash, very comfortable seats, the controls were ergonomically correct and simple and all the information a driver needed was in a centralized elongated screen at the top of the dash. The car had a smart key and a shift by wire system.

It was a worthy evolution of the best-selling hybrid. And for $29,842, the 2016 Toyota Prius remained reasonably priced.