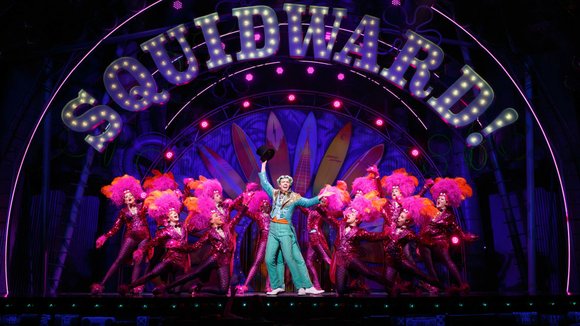 Spongebob Squarepants was created by marine biologist and animator Stephen Hillenburg out of an unpublished educational comic book. It premiered on Nickelodeon in 1999. Seventeen years, two movies, two Emmys and 12 Kid's Choice Awards and $18 billion dollars in franchise merchandising revenue later, it is on stage in the Pre-Broadway World Premiere of The Spongebob Musical at Chicago's Oriental Theatre, 24 West Randolph, through Sunday, July 10.

With a roster of Grammy Award winning songwriters, A Tony Award-winning design team and a visionary director, The Spongebob Musical is a highly imaginative, high energy production that transforms the lovable undersea characters of Spongebob Squarepants (Ethan Slater, in his Chicago debut). Squidward Tentacles (Tony and Olivier Award nominee Gavin Lee), Sheldon and a host of other lovable animated sea creatures magically realized on stage as flesh and blood characters with a brilliant cast, eye-popping sets and an original score from a galaxy of the hottest composers and artists from the worlds of pop, hip-hop, soul, Heavy Metal and vintage Broadway.

Tina Landau, of Chicago's Steppenwofd Theatre, is director, with highly creative scenic designs from the team behind Fun Home, Hedwig and Spring Awakening that takes up the entire front of the house, creating the world of Spongebob's Bikini Bottom that practically spills into the audience, Spongebob is a full-immersion experience, taking the audience into Spongebob's undersea world with a story that pits the plucky sponge against the forces of total annihilation with a message that even the most unlikely person can become a hero with enough self-belief and heart.

With original songs by Yolanda Adams, Steven Tyler and Joe Perry of Aerosmith, Sara Bareilles, John Legend, The Flaming Lips, Cyndi Lauper, They Might Be Giants, T.T., David Bowie and others, with additional songs by Jonathan Coulton, The Spongebob Musical is a rhythm machine that will keep audience members young and old dancing in their seats.

It might seem a little long for the younger set, but there's enough to hold their attention, including moveable set pieces, special effects and high-stepping dance numbers (Squidward steals the show in the second act) that make it a sure-fired success when it reaches Broadway. The Spongebob Musical plays through Sunday, July 10 at Chicago's Oriental Theatre. For tickets and showtimes, visit BroadwayinChicago.com.