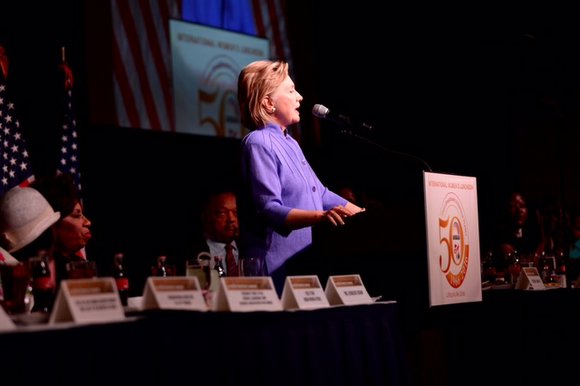 than 1,000 people who attended the “Lifting As We Climb” Women’s

convention – A More Perfect Union: From Freedom to Voting Rights to

said, adding “We have neglected too many of our people, particularly our

children, for too long.”

Place for Secretary Clinton’s nearly 30-minute speech. The luncheon was

founder and president of Rainbow PUSH.

Rev. Jackson, who has known Secretary Clinton for 40 years, introduced her

as someone the country can trust.

“We trust Hillary Clinton when she fights for a One Big Tent America; one

that includes our immigrant community, not one that fuels hot rhetoric of

bridges of hope and unity. We trust Hillary Clinton to keep America and the

and works to stop the violence. We all grieved over the terrorist killing

of 49 people in Orlando. There are urban killing fields all across America.

In Chicago, gun violence has resulted in 66 people killed last month, over

“We trust Hillary Clinton to convene a national summit of urban

reconstruction, investment and jobs and to address this national state of

emergency. We must take the initiative to end these killing fields and the

poverty that does so much to create them.

“Trust matters. Justice matters. Hillary, you’ve been through the fire.

That’s what separates metal from alloy.”

Secretary Clinton was the keynote speaker, but she shared the dais with a

Maxine Waters of California, Jan Schakowsky and Robin Kelly, both of

Also on the dais was a living legend, Academy Award-nominated, Emmy and

Ms. Tyson said the first award she had ever received for her acting was

Jackson who, she said, is “always in my heart.”