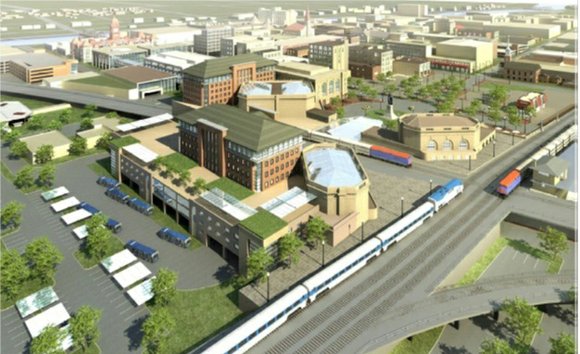 This is a rendering of the proposed Joliet Regional Multi-Modal Transportation.

The Joliet City Council Tuesday night approved bid awards that will allow work on a new train platform to move ahead.

Work ceased on the station in October 2015 when $30 million in state grant funding dried up due to the ongoing state budget crisis.

Joliet City Manager Jim Hock said at a pre-council meeting Monday night that the delayed approval sent the bid costs higher and will result in an overall higher price tag for the project to the tune of $400,000. Hock did note that IDOT is still in favor of approving the project and that the state is expected to pay for the majority of the construction costs.

According to a memo, the city will pay $484,000 for improvements to St. Louis Street and a nearby parking lot during the course of the project.

In addition to the train platform, plans for the station also call for a Pace Bus component at a future date though city officials have acknowledged that a funding source at the state or federal level will need to be secured.

Metra announced this week that it will add a 7th train line to the Heritage Corridor leaving from Chicago’s Union Station that will make its final stop in Joliet. That added line is set to begin on March 14th for the weekday service.

Under the approved agreement, the city will continue with the second year of its two-year agreement to split the cost of bus shelter advertising. The city will pay just over $15,000 for the program.

Last year, the city recouped its investment with revenue from the advertising bringing in approximately $17,000.

Since 2011, the city has maintained a bus route from its downtown to the CenterPoint facility that runs in the morning and afternoon.

City Manager Jim Hock Monday said that the route provides a mass transit option for employees to get to and from the industrial center and an “essential for economic development in the area.”

In other business, the council tabled a vote to approve new regulations governing sump pump water discharge for residential properties.

Currently, the city has no rules regarding the discharge of water from residential basements said Hock.

Under the proposed rules homeowners would be required to make sure that water from a sump pump is at least 10 feet from a building or an adjacent property.

Fines for violating the new rules could cost up to $750 for each day of the violation.

Hock said that the language that was set to be approved Tuesday night was “dealing with issues from a building department perspective only” and that the city’s “utilities division also has some regulations regarding sump pump changes.”

Hock said that officials would have the matter before the board within a month for a vote.