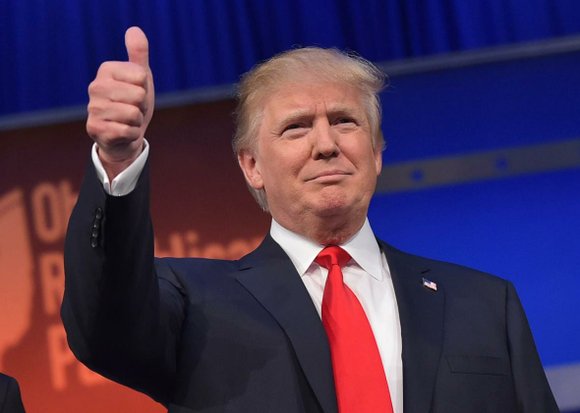 "America, America, God shed his grace on thee!" Those are words from the song "America the Beautiful" that we all learned in elementary school.

Well, if America ever needed grace and salvation, it is now.

Donald Trump won the Nevada primary. He will most likely be the Republican nominee for president. Though my politically astute friends try to calm my fear that he will win the White House, I am not so sure. America's racists are on a roll, and they are not about to stop.

Donald Trump says that he will "make America great again." That's merely a euphemism for restoring White supremacy. It's a euphemism for making it so that Black and Brown people are under the foot of the Empire, denied of justice in the courts, fair treatment in housing, education and employment. Many of America's White people are afraid of losing power, plain and simple.

Some say they are angry because of the economy, but the biggest issue for them is that the numbers of Black and Brown people are steadily increasing. They are afraid that their base is getting smaller and smaller, and with that, their power, their capacity to oppress "the least of these."

And Donald Trump says he will make it all better. He is giving them pablum and they are eating it like starving children in underdeveloped countries eat when they are finally given substantive food.

I read a troubling article about Trump and the so-called "Central Park 5." Trump was on the case, calling for the five Black teens accused of raping a White woman, to be convicted and put to death. Actually, his statements seemed more to ask that they simply be killed. (http://www.theguardian.com/us-news

What Trump said and did in that case was appalling and troubling ...but not for people who still believe in vigilante violence when it comes to Black people accused of doing something to a White woman. When it was proven that the teens did not rape the woman, and the charges were dropped, Trump was furious, and was even more furious when the city of New York awarded the young men, collectively, $41 million in damages.

This is not a man who believes in justice for all people. He is clearly racist, and openly so. He is unabashed in what he says and believes, and he knows he has a large group of Americans, mostly White but not completely so, who are with him. They want the America of the past, where Black people stayed in their place. They don't care much that America's "exceptionalism" came mostly from this country's boast that it was a democracy where everyone could come (pluralism) and make good on "the American dream," a/k/a capitalism. Racists never ascribed to that claim.

They were clear that America was to be the land of opportunity for White, property-owning men. Colored people were not worthy of having full citizenship. They were merely the tools that White men would use to make this country the powerful country it became.