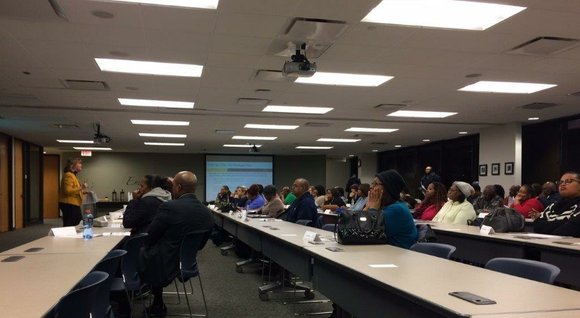 "And this year we didn't get one applicant," she said. Spesia said that the "trend isn't changing fast enough to keep up with these needs."

"It's a very real crisis in education in general," she said. Assistant Superintendent of Business Services Ilandus Hampton said that the small pool of minority candidates to draw from for open spots gets exacerbated further when considering the fierce competition from the 600 or more school districts around the state.

"We're all competing for the same talent," said Hampton who noted that he was among a small cohort of only 15 minorities serving in similar positions to his around the state. Hampton said that between 2012 and 2016, the district hired 10 African American teachers, 6 Hispanics, 1 Asian, and 57 Caucasian staff members. The impending reforms in District 204 may come just as the district begins to face an increasing number of retirements with 54 staffers set to retire between 2016 and 2019.

Superintendent Cheryl McCarthy said that "the utopia would be that we would be reflective of our student population and that the majority of our teachers would be Hispanic" but "that would be, right now, an impossible goal," she said citing the lack of diverse candidates. Board president Jeff Pierson said that he and Spesia would petition the board at its March 15 meeting to re-open its action plan process after which a committee of community members and district officials can study the issue and create a plan to address it.

He addressed the skepticism of some in the room who've waited a long time for change.

Pierson said that he hoped that through the action plan process that "we can learn to trust each other again," adding, "That's my goal." He also expressed confidence that the board majority would vote to open the process as well.

"I can say that it's highly likely that this will be approved 7-0," said Pierson.

Spesia said that the process could include "engaging the next generation of teachers," lobbying legislators for incentives for "teachers of color", and looking at "culturally responsive teaching. "This conversation is just beginning," she said.

The complete presentation can be viewed at the district's website: http://www.jths.org/assets/1/7/Community_Meeting_3-3-2016.pdf