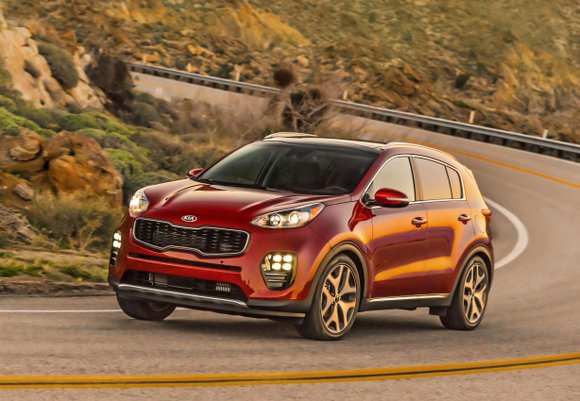 The new Kia Sportage was a little bit longer and the wheels were pushed to the corners. The tiger nose grille was lowered, the headlights were longer and they were pulled back into the fenders. There were also wrap around taillights. And in what is a becoming a brand signature, the ice cube LED fog lights on the turbo powered Sportage seemed bigger, thus, they were more prominent.

It was as though the sheet metal was pulled tightly over the front of the chassis. It gave this new Sportage a distinctive face. Kia called it “tension.” Wheels at the corners meant the 2017 Kia Sportage had short overhangs and that made the 17, 18 or 19-inch wheels look bigger.

What’s more, wheels at the corner gave the vehicle a wider stance which translated into better road stability. We needed it on the two-lane mountain highways as we headed to the La Casa Del Zorro Resort in Borrego Springs, California.

The driving dynamics of the new Kia Sportage have been improved too. Increased body stiffness meant less chassis twisting on winding two-lane roads like CA-78 and CA-79. The vehicle was steady; the steering was true and bigger brakes increased stopping power for those times when we were moving too fast to make tight turns.

The 2017 Sportage is equipped with the third generation of UVO. It supports Android Auto or Apple CarPlay. The infotainment system features 14 telematics services at no charge. It has 8 GB of music storage and access to Pandora and it has a portable Wi-Fi hotspot. The touchscreen is now capacitive. Standard is a 120 watt six speaker audio system. The premium setup had 320 watts, eight speakers including a subwoofer, an external amplifier and Clari-FiTM9, music restoration technology.

Of course, there was Bluetooth, a navigation system, satellite radio, auxiliary and USB jacks as well as ports for 12 volt powered accessories.

The sounds were good but so was the interior space. Any way you look at or measure it, the 2017 Kia Sportage’s interior was more comfortable than the outgoing model. Headroom and legroom were increased, not by much but more is always better.

The second row floor was lowered, Kia said, enabling more headroom but we think it made getting into the back seat easier too. And the liftgate will open automatically, when equipped, if the Kia senses the key fob within three feet of the rear. That makes putting stuff in the back when hands are full easier.

The interior was also clean. The seats felt really good, they cradled the body like mittens. The dash seemed lower and that created an airy feeling. The infotainment screen was the only thing on the dash creating a minimalist look. Controls like the radio, media, phone, heated steering wheel etc. were below. Though it was not the case, each row of buttons appeared a little further in than the row it preceded, it was a cascading effect and nicely done. The interestingly fresh look did not resemble a center stack.