Shorewood state of the village: Lake water planning, TIF district on the agenda for 2016 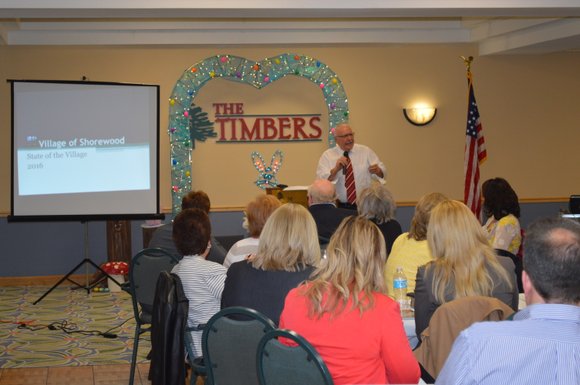 Planning the route of a future Lake Michigan water pipeline and working out the details for a TIF district are among some of the bigger projects on the to do list in Shorewood for 2016.

The presentation was Chapman’s 15th such address and included some highlights from 2015 and what some in the audience of business owners and elected officials could look forward to over the course of 2016.

Chapman said that the village will continue to tuck away the money being collected from a .75% home rule sales tax for a future Lake Michigan pipeline project. The added tax was approved by the village board after a referendum was approved last year by voters to granting the village home rule powers.

Chapman said that the village will likely spend the next year preparing a study that will determine the best route for the $30 million pipeline to take.

Those revenues are on an upward trend said Chapman who noted that would bode well for the future financial health of the village. He also noted that the last two remaining sales tax rebate incentives that were granted to entice new businesses would expire in the next year as well.

“All the dollars will be coming in to the community,” said Chapman.

The village’s bond rating, said Chapman, is also another indication of its financial health with a double A bond rating. The perilous State of Illinois’ finances are the only blockade to achieving triple "A" status.

“The State of Illinois is such bad shape financially that nobody wants to give any of the municipalities a triple "A" rating,” he said.

Chapman said that village staff runs a lean operation with contracting out for legal and engineering services which some municipalities have in house. That means, he said, that the village has been able to keep its personnel costs at around 54% of its general fund expenses.

Chapman said that the village will continue to see new housing starts grow in the next year as well despite its biggest growth area in the Shorewood Glenn subdivision built out to capacity.

The mayor pointed to Ryland Homes and Ryan Homes continuing to build out their subdivisions in the Edgewater subdivision and near the town center. Chapman said that Ryland would also be looking for new land to build more homes in the coming year in the Black Road corridor.

Chapman said that the village added 33 new businesses in 2015 and planned to attract more in 2016 with plans to establish a TIF district for the area near the intersection of Routes 52 and 59. Attracting new business will continue with the help of the Retail Coach consulting firm he said. New projects on the horizon will include a remodel of the Burger King restaurant at the NE corner of Route 52 and 59, the continued expansion of the Alden memory care facility on Black Road and development on the Anderson’s Corner lot at the NW corner of 59 and 52.

After a contentious approval process last summer, Chapman was also happy to report that the Lenny’s Gas n’ Wash station at the corner of Route 52 and River Road was set to open this week as well. The site will include fueling stations, car wash, as well as a Dunkin’ Donuts and Pop’s Beef take out.

Despite the protests from nearby neighbors last year, Chapman said that he hopes to win over some of the critics of the project noting the tax generating potential for the business.

“The people that were truly against it are going to find it to be a very good convenience,” said Chapman.

Illinois 97th District Representative Mark Batanick said that the village was in good hands with Chapman who “treats the town like his family.”

“That makes for a great leader,” said Batanick.