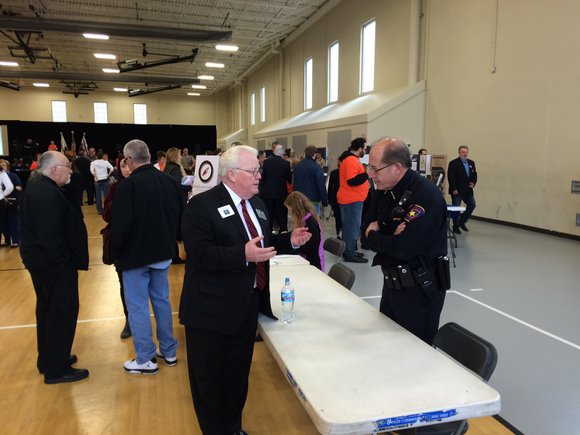 Members of law enforcement, state, county and public health officials, as well as many of the people touched by the growing use of heroin in Will County gathered for the Hero-Helps Soutwest Coaltion Community Summit in Romeoville last week.

The event was held at Romeoville’s Edward Hospital Athletic and Event Center and focused attention on the continuing need to communicate the threat and ongoing danger the drug poses in the county and throughout the state.

“We’re going to continue to see it here in the county,” said Turvey. The drug’s use is not only dangerous he said, but can also lead users to commit other crimes to feed their habit.

Will County Executive Larry Walsh said that the county has made “big strides” in its efforts to curb the drug’s destructive impact on lives since it began working toward a solution to the problem in 2010.

Walsh said that county officials knew then that they had to “do more than talk about it” and that progress has been made in an effort to educate the public, get treatment help for those who are addicted, get drug dealers off the streets and get the attention of legislators in Springfield. He noted the effectiveness of outfitting officers around the county with the overdose drug Narcan which so far has been used to save the lives of 12 people.

Illinois House Representative Lou Lang (D-16th) and Republican minority leader Jim Durkin (82nd) attended the conference to talk about the Illinois Heroin Crisis Act that was passed in 2015 and the ongoing work at the state level to battle the impact of the drug on communities.

When he started work on what would become the heroin crisis act, Lang said that “Illinois has become ground zero for the heroin epidemic.” Lang pointed to the passage of the law as a sign that things can get done in Springfield in a bipartisan fashion.

“That makes me happy, but what doesn’t make me happy is we still have a heroin problem in our state,” said Lang.

Indeed, despite the work at the state and county-level, deaths attributed to heroin overdoses spiked last year to 53 in Will County, matching 2012, for the deadliest year on record since 2010 when there were 26 overdoses attributed to the drug. Since 2010, the county has made some headway lowering overdoses to 34 in 2014.

So far, in 2016, Will County Coroner Patrick O’Neil said that 2016 looks to be on track to be another deadly year with 19 deaths so far attributed to heroin and another couple that may also be from its use. The problem is further compounded by the arrival of synthetic forms of the drug or strains laced with other drugs, such as fentanyl.

“Heroin wasn’t supposed to be part of Will County it was more of a big city problem,” he said.