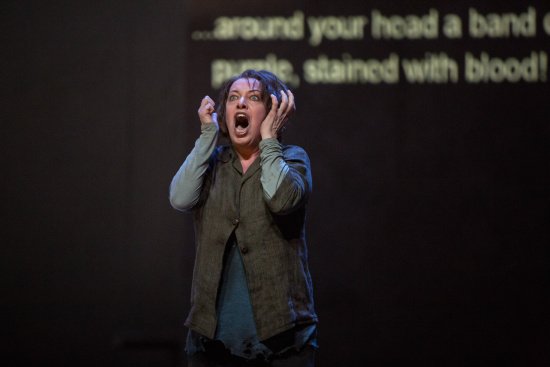 The standing ovation for last weekend's Met Live HD performance of Richard Strauss's Elektra was one of the most thunderous in recent memory. Deservedly so, as this, the final transmission of the Met's 10th Live HD season, delivered a fiery climax to what was an outstanding season.

The opera was filled with stellar performances from beginning to end. Conductor Esa-Pekka Salonen, who is also a celebrated composer, let the cat out of the bag early on, when, in a pre-performance interview with Met General Manager Peter Gelb, he declared that "this is the largest orchestra assembled for anything, anywhere!" He certainly delivered Strauss's complex score with a dramatic arc that brought out both its dramatic depth and lyricism.

The music is rich and complex and demanding of both the performers on stage and the orchestra members in the pit. That said, the performance was flawless. No one got off the hook. Even the chorus members, who opened the opera, were charged with the task of singing Strauss's Herculean octave leaps while moving restlessly about the stark, foreboding set of Richard Peduzzi. Stage director Vincent Huguet showed his best work here, in this hard-hitting production by Patrice Chereau. Lighting designer Dominique Bruguiere similarly deserves praise for creating the somber, yet charged atmosphere of the performance.

Nina Stemme gave an Olympian performance as Elektra, matching Strauss' Himalayan vocal leaps with her own high-stepping movements in a physically demanding role. The regal Waltraud Meier as her troubled mother, Klytamnestra, gave audiences a weighty performance that solidified her standing as one of the most commanding and enduring veteran performers of the operatic stage.

Strauss's Elektra tells the story of Elektra, daughter of Agamemnon and Klytamnestra, who is driven to the brink of madness after the assassination of her father, the king, following his return from Troy. Filled with a rage, she covets the ax used by her mother, Klytamnestra and her lover, Aegisth (Burkhard Ulrich), and at times fondles it almost lovingly as she plots her revenge.

Her sister, Chrysothemis (a luminous Adrianne Pieczonka), begs Elektra to back off and move on with her life, but Eletkra is having none of it. When her mother arrives with her entourage after preparing sacrifices to appease the gods, she asks Elektra what sacrifice would ease her grief. Elektra replies in a rather pointed riddle that makes it clear that only the blood of Klytamnestra, her own mother, will ease her distress. When her sister reveals that her mother and Aegisth plan to lock her away in the tower, Elektra forges full speed ahead with her bloody plot, dancing with frenzied elation.

Elektra works herself up to a fever pitch as she imagines how her long-absent brother, Orest (sung majestically by bass/ baritone Eric Owens), will return to strike the deadly blows. Upon hearing that he has died, Elektra vows to act alone.

The most arresting scene of the opera then unfolds, as Orest (Owens) steals his way back into the castle and finally reveals to Elektra that he is, indeed, still alive. The duet between Owens and Stemme is the most powerful and vocally rich moment of the opera. Esa-Pekka Salonen's precise conducting brings out the lyricism of Strauss's score, further heightening the exquisite drama.

This performance was a ravishing conclusion to a superlative 10th season for Met Live HD. With the steady hand of HD director Gary Halvorson, the originator of the Met's Live HD concept, this transmission deserves a second look, even if you just saw it over the weekend. Encore Presentations will take place in theaters globally Wednesday, May 4 at 6:30pm local time. Visit metopera.org or fathomevents.com for theatre locations and ticket information.