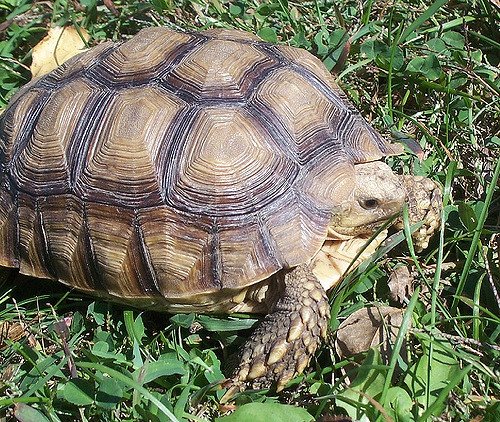 Many people are fascinated with non-domestic animals—whether exotic or native species—and think these animals would make great pets. However, non-domestic animals, including certain species of snakes and tortoises, do not make great additions to households despite being included in the pet trade. In fact, it may cause more harm than good to bring a non-domestic animal home. Dr. Alice Blue-McLendon, clinical assistant professor of Veterinary Medicine & Biomedical Sciences, provided some insight on having non-domesticated animals as pets.

“There are a number of species of non-domestic animals that are available for purchase in the pet trade, but a lot of times people don't consider the long-term consequences of housing these animals or if they are qualified to care for the animal,” Blue-McLendon said. “Therefore, a lot of non-domesticated animals should not be sold to the general public.”

One example of a non-domestic animal sold in the pet trade is the African Sulcata tortoise. Although the tortoise may be small enough to fit in the palm of your hand as a hatchling, Sulcata tortoises grow to be the third largest tortoise species in the world. “We have three Sulcata tortoises here at the Winne Carter Wildlife Center and all three were rescues,” Blue-McLendon explained. “Two of the tortoises were pets that people bought when they were tiny and didn’t know how huge they would get. They can grow in excess of 200 pounds and most people cannot accommodate an animal that big in their back yard. So, a lot of large tortoises end up in rescue centers.”

Non-domestic animals like the African Sulcata tortoise are safest in their natural habitat or in zoos or sanctuaries where they can be provided the correct habitat for their large size. If kept as a pet, it may be hard to provide the appropriate habitat which can put the health of the animal at risk. “It is a challenge to provide the appropriate habitat for many wildlife and exotic animal species,” Blue-McLendon said. “For example, people that live in cold climates have to figure out a way to get the animal inside. If it’s a 200 pound tortoise, it's not like a dog where you can put a leash on the animal and tell it to follow you into your garage or house. You have to be creative about how to keep the animal safe in different variations of weather.”

For example, the Burmese python, a snake species in the pet trade, has become overpopulated in Florida as a result of either escaping or being intentionally released by their owners. “The Burmese python is an example of how an exotic animal was made available to the pet trade, but then people got tired of caring for them and the snakes were either let go or they escaped into the wild,” Blue-McLendon said. “The snakes survived and did well in the wild, and now their populations have become a huge problem because they're not a native species. They compete for the habitat of native species, and they may consume native species. They can breed and live well in the Florida environment, and have become a problem for homeowners living on the fringes of the everglades as well as for indigenous species.”

To prevent situations like this, Blue-McLendon advises people to educate themselves about suitable pets before buying one. In addition, there may be specific state laws that prohibit the ownership of some non-domestic animals.

“I think people have a fascination with non-domestic animals, whether they're exotic or native species,” Blue-McLendon said. “That is understandable, but people have to resist the urge to own a non-domestic animal without first learning as much as they can about the animal species. A lot of animals are fascinating, but people should wait to see those animals in their native habitats or in zoos or wildlife parks.”