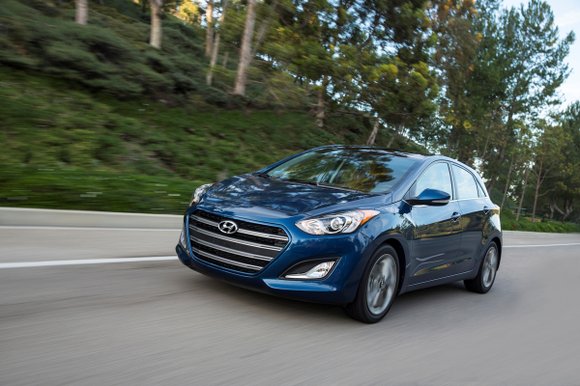 The 2016 Hyundai Elantra GT may be one of the better steals in all of autodom.

The GT differs from its cousin, the Elantra sedan, in that it is a four-door hatchback and comfortably seats four people. The difference starts under the hood. The Elantra GT had a 2.0-liter direct injected four-cylinder engine that made 173 horsepower and 154 pound-feet of torque. That was standard equipment.

This powerplant was mated to a six-speed automatic gearbox with manual shift capability. That was standard too. The tandem gave the Elantra GT and EPA rating of 24 mpg in the city, 33 mpg on the highway and 27 mpg combined.

At 2,900 lbs., the engine provided more than enough oomph to move the Elantra GT smartly. It didn’t light up the 17-inch alloy wheeled tires but the car did not seem weak or anemic during every day driving which included expressways.

The GT had a MacPherson strut front suspension with coil springs and gas shock absorbers. In the rear was a lightweight coupled torsion beam and monotube shock absorbers. A 22 mm diameter front stabilizer bar helped reduce body roll during cornering. It was a steady ride without a lot of bouncing associated with a small car. The GT had higher spring rates, a stiffer twist beam and premium dampers for improved body motion control.

We were especially impressed with the 2016 Hyundai Elantra GT’s driver selectable steering mode. It could be set on comfort, normal or sport. Hyundai said ‘Comfort’ offers the greatest ease of steering and is ideal for city and parking environments. ‘Sport’ is optimized for higher-speed highways or winding roads, while ‘Normal’ is ideal for a mix of driving conditions. It was an impressive piece of technology for a compact car.

For a few years now, Hyundai has branded its style philosophy as Fluidic Design. We don’t know that the phrase has stuck in the public’s mind but it does make for pretty good looking vehicles.

The 2016 Elantra GT, freshened last year, had a drag coefficient of .30. That’s pretty good for a vehicle with a somewhat flat roof. Still, the car’s profile was long, it had sleek side mirrors, and the tire gaps were minimized while the rocker panels were streamlined.

There was a revised front grille, wrap around headlights and sculpted hood creases. It had a body side graphic that featured a chrome beltline molding. And it had LED taillights. The Hyundai Elantra really did look sporty, fluid and in motion while it was standing still.

In addition to its packaging, Hyundai managed to stuff the Elantra GT with a bunch of stuff at a reasonable price. The most obvious was our test model’s panoramic roof that came with a fairly sizable moonroof. In other words, what looked like the front half of the glass roof opened.

Heated front seats were not a surprise; some compact cars do have the feature. But the eye opener was the front seats were cooled too. And the 2016 Hyundai Elantra could be equipped with a cooled glove box.

The interior was pretty spacious. We found that there was enough head and legroom in the rear seat. Although Hyundai says the Elantra GT is a five passenger hatchback, we think four adults could really be comfortable in the car.

We had the tech option package which included leather seating surfaces, a rearview camera, satellite radio and a navigation system. There wasn’t much in terms of driver comfort that the Elantra didn’t have.

The style package included fog lights, a sport-tuned suspension, and turn-signal indicators on the side-view mirrors, a power driver’s seat and a smart key. The car was also equipped with Bluetooth, voice controls and Blue Link@, Hyundai’s infotainment system that enables point of interest searches and downloads, voice texting, location sharing, Geo Fence that lets you set boundaries on where the car can be driving and enhanced road side assistance.