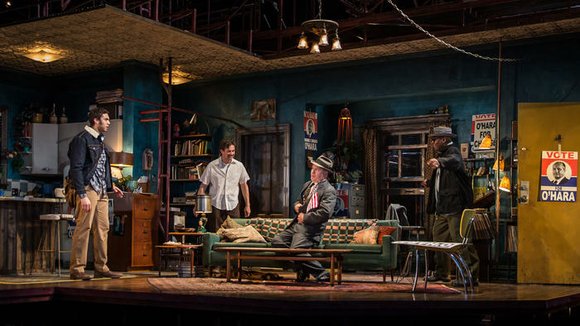 "Sign" is a talkfest, but there are some real verbal gems to be found among

Hypocrites' The Hairy Ape for A Global Exploration: Eugene O'Neill in the

Psycho, The Humans, Casa Valentina, A Night with Janis Joplin, among

others), and Sound Design by Goodman's Mikhail Fiksel (2666, Feathers and

Teeth, The Upstairs Concierge, and others), this ranks among Goodman's

myriad characters. David (Grant James Varjas in his Goodman debut). is a

turns out to be a sell-out, who strives to reconcile his political

cowardice with pragmatism. Alton is a light-skinned African American,

Camino Real) who passes for white on a whim, and is tragically in love with

Iris' sister, Mavis (Miriam Silverman, in her Goodman debut in a smashing

(Kristen Magee, also in her Goodman debut), is the sage one ("There are no

squares. Everybody is his own hipster," she cavalierly declares as she

acknowledges her husband's infidelity and her begrudging tolerance of it).

Christmas Carol, Blues for an Alabama Sky, Ties That Bind, Galileo), is a

struggling artist with a message far bigger than his underwhelming talent.

Touching and all too humanly pathetic, Sidney Brustein gives a voice to

chaotic, yet terrifyingly beautiful mess that is life. "The world is to

crack down the middle," Sidney declares, in a moment of epiphany, as the

events of the play descend into tragedy. Those words were first uttered

on a Broadway stage some 50 or so years ago, but they still ring with

The Sign in Sidney Brustein's Window runs through June 5. It is concurrent

with the citywide Lorraine Hansberry Celebration, which includes A Bus

Tour of her native South Side Chicago, a free screening of the film A

Raisin in the Sun, starring Sidney Poitier and Ruby Dee, as part of

Contemporaries, women who were raised and educated in Chicago who have made

indelible impacts on the American theater. For information, visit