Will County Executive ‘disappointed’ by board’s lack of action 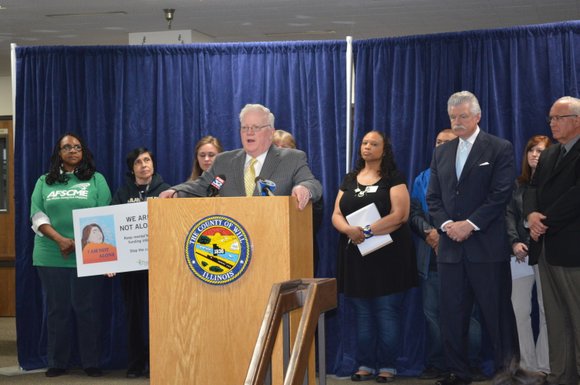 Will County Executive Larry Walsh said Monday that the county would work toward finding a solution that would keep health department services funding until a state budget can be approved. Photo by Brock A. Stein

Will County Executive Larry Walsh said he is very disappointed with the action taken during the County Board’s Executive Committee yesterday. A request to extend emergency funding to the Health Department was ignored by a majority of committee members.

Earlier this month, the health department announced it was faced with laying off 53 employees and ending programs in behavioral health, vision and screening, and HIV prevention which would affect more than 52,000 residents in Will County.

In an effort to preserve these programs, Executive Director Sue Olenek presented two requests for emergency funding to the Executive Committee yesterday. The first proposal was for more than $1.7 million and would restore all the threatened programs. The second proposal was for $426,873 and would reinstate the most critical services such as the Crisis Response Program, the intake component of the Adult Services; Capitated Care, a mental health program created to fill in the gaps left by the closing of the Tinley Park Mental Hospital; and the Juvenile Justice program which includes extensive case management and advocacy for youth in the justice system.

“This will buy some time for the health department to keep these programs going until we receive funding from the state,” Olenek said. “This funding will allow us to continue to search for alternative solutions.”

The Republican-led committee initially voted down the proposal. The committee then decided to send the proposal to the full County Board at their May 19th so that all 26 county board members could weigh in. Near the end of the meeting, the committee reversed course after many in the audience had left the room. Walsh objected to this way of doing business and said it does not serve the interests of local residents nor those county employees who provide these essential services.

“It is no surprise to myself, the County Board, or our residents that we are in a very unfortunate situation here in Illinois,” said Walsh. “However, if we just stand by and watch as our health services for our most vulnerable residents crumble and do nothing … Well, shame on anyone who chooses that option.”

Related to this issue, the General Assembly approved SB 2038 Thursday afternoon that would provide partial funding to local agencies on a range of health care services. However, this legislation will offer less than half of the funding to the County and others agencies. In addition, it is not clear if Governor Rauner will sign the bill since it does not contain any of his Turnaround Agenda items.

Walsh called on legislators and Governor Rauner to once and for all find a solution to the state’s budget crisis. In the meantime, Executive Walsh did not rule out calling a special board meeting in advance of the May 27th deadline to save some or all of the employees impacted by the proposed layoffs.