A Glimpse Into the Past. Looking Toward Our Future 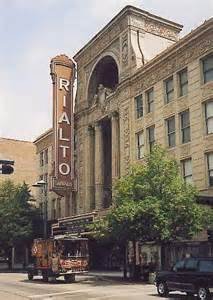 The Rialto Square Theatre is eagerly planning special events in anticipation of its 90th Anniversary. The Rialto Square Theatre opened its doors to the public on May 24th, 1926. For ninety years, this historic venue has served Joliet and the greater Will County area as an entertainment destination from the days of vaudeville and silent movies and still today as a regional performing arts center. For the past three decades, the Rialto has endeavored to serve as a foundation for the economic revitalization of downtown Joliet and has served tens of thousands of persons annually who have enjoyed attending performances, public and private events and educational programs. The Rialto Square Theatre staff has planned special programs, activities and tours for all to enjoy for the 90th birthday celebration that will include memories of the past and a vision into its future. “The rich history of the Rialto is certainly something that should be recognized but the 90th anniversary is more about celebrating the future of this magnificent facility,” stated Jack Ericksen, Rialto Square Theatre Interim General Manager.

The day is set as an open house style event and is FREE and open to the public. The first 500 people through the doors will receive a free commemorative magnet compliments of JM Printers.

A schedule of events is below:

The tour will start with a brief history of the Rialto while you walk through the beautiful architecture and craftsmanship of the grand Esplanade and Rotunda. You will then go on stage and beyond to the “green room” where you will see thousands of signatures from the artists who have performed at the Rialto. Feel free to take pictures and ask questions.

View the Duchess chandelier up close and personal. The chandelier will be at ground level for viewing then raised to the ceiling during a complimentary champagne toast. Ceremonial cutting of the birthday cake by Joliet Mayor Bob O’Dekirk and Will County Executive Larry Walsh Sr. Be a part of history as everyone in attendance may sign an oversized birthday card and be included in a celebratory group picture in the Rotunda that will be shared for years to come and for all to remember.

Bring your camera or cell phone and take some selfies or behind the scenes pictures that only the Stars get to see! Photo ops will be available on stage. You will ten go on stage and beyond to the “green room” where you will see thousands of signatures from the artists who have performed at the Rialto. Feel free to take pictures and ask questions. A tour guide will be on hand to show you around and demonstrate the backstage workings of a 1926 theatre.