Celebrate Memorial Day around Will County 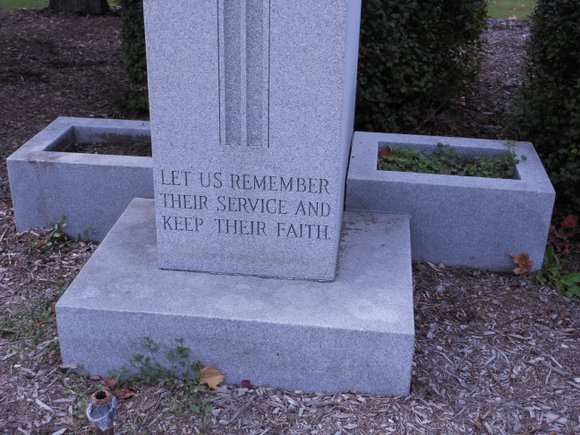 A monument in Plainfield, like many around Will County, is a memorial to the service of veterans to their country. Photo by Brock A. Stein

While many residents may use it as an excuse to take a three day trip out of town, Decoration Day, the holiday that today is known as Memorial Day, is meant to serve as a somber reminder of those who died in the service of their country.

The holiday got its start after the Civil War when it was officially proclaimed in 1868 as a day to decorate “the graves of comrades who died in defense of their country,” according to usmemorialday.org .

The holiday was officially declared a national holiday in 1971.

Around Will County, residents will have several opportunities to honor those who served with memorials being held, parades, and even a bike decorating contest. Where ever you live, be sure to take a moment to remember those who made the ultimate sacrifice and be sure to thank a veteran on Monday for the freedoms you enjoy today.

The village will hold a remembrance starting at 10 a.m. at the Edward “Doc” McCartan Memorial, 11 Montrose. The memorial park is named for a long-serving trustee of the village.

The parade will begin at Ira Jones Middle School, 15320 S. Wallin Drive and head east on Ottawa Street and will continue to Settler’s Park where it will end at the park’s Memorial with a flag raising ceremony.

St. Mary Immaculate Church in Plainfeld will host a mass on Memorial Day starting at 9:00 a.m. at St. Mary Immaculate Cemetery 14313 S. Naperville Road. In the event of rain, the mass will be moved to the Church. Attendees are invited to bring a lawn chair for the outdoor memorial.

A memorial service will be held at the Abraham Lincoln National Cemetery, 20953 West Hoff Road in Elwood, starting at 11:30 a.m.

The village will kick off its Memorial Day celebration at 6:30 p.m. at Towne Center Park with a patriotic parade. Children are invited to decorate their bikes in red, white and blue and join the half-mile parade. The first 100 participants will receive a patriotic decoration. Call 815-741-7710 or E-mail parks@vil.shorewood.il.us to be added to the parade list.

The Joliet Area Community Hospice Volunteer Veterans Committee will host a Memorial Day Ceremony on Tuesday, May 31st from 9-11 a.m. to honor the veterans from their program who passed away over the last year. Families and friends of JACH are invited to attend. Weather permitting, the event will be held outdoors in the JACH Flag Galleria, 250 Water Stone Circle, Joliet.

The village will hold Memorial Day services starting at 9:30 a.m. at Boardman Cemetery followed by a service at Hillcrest Cemetery, 384 Boughton Road at 10 a.m.

Services will conclude at 11 a.m. with an event at the village veterans memorial in front of Village Hall, 375 W. Briarcliff Road. In the event of rain, the service will take place on the Performing Art Center stage.