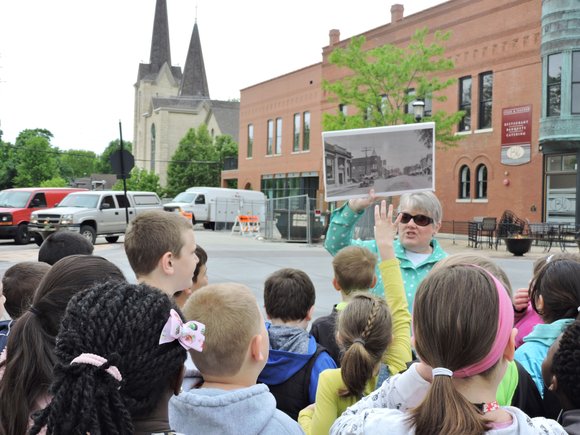 Third grade students from Charles Reed Elementary take a tour of downtown Plainfield for a lesson in local history. PSD202

Charles Reed Elementary School third graders peered into Plainfield’s past while standing in its present during a tour of the village’s downtown.

Volunteer guides held up large photos showing the downtown Plainfield streetscape in the 1800s and talked about how the village came to be and shared stories about the its history.

The curriculum was added to the third grade social studies textbook in 2013. Members of the Plainfield Historical Society, District 202 and the textbook publisher Pearson worked together to customize the actual textbook that students use.

The local history chapter starts with a page about the late Elizabeth “Bess” Eichelberger, a local icon who was active in District 202 and the community. She was the first female president of the Board of Education.

The rest of the chapter includes three teaching units spanning settlement by the Potawatomi Native American tribe, to the first white settlers in the early 1800s, to the devastating tornado in August 1990 that destroyed much of the town.

Fourteen of District 202’s 17 elementary school were scheduled to take the downtown tours in May.

District 202’s Foundation for Excellence pays for Transportation to downtown Plainfield and entrance to the Joliet museum. The Foundation is a non-profit organization dedicated to supporting education in District 202.

Her students really enjoyed learning about Plainfield’s history and especially enjoyed seeing a photo of their school in the textbook, Hatzer said.

“I personally think this is a very valuable part of our social studies curriculum as it gives the students a sense of ownership and pride in their hometown,” Hatzer said.