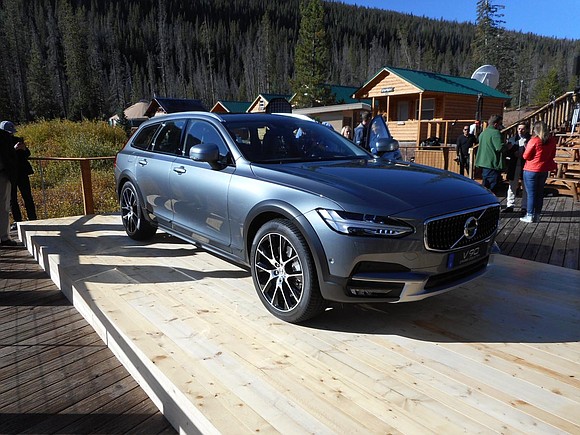 We got the chance to experience the V60 Cross Country in the canyons that are Urban America rather than the spaciousness of North Central Colorado. In Detroit, where the background was fading into the grays of winter, Volvo’s seats, some of the best in the industry, were soft and cupped the body like easy chairs.

When we come off the Lodge Freeway at Myers and McNichols, we never make it through both lights that are a block apart. But this time the V60’s much appreciated acceleration allowed us to make both lights.

And when we were able to make a relatively tight U-turn out of our parking space, we really did appreciate the maneuverability of the V60 Cross Country. Its suspension smoothed out the rough roads here which can be ruddy in places. As a colleague of ours often says, the V60 Cross Country was road worthy.

Volvo’s Cross Country 60-Series uses the components from the suspension of the XC70 sport utility. The S60 Cross Country, like the V60, is almost two and half inches taller than the sedan and the wagon. Overall it had 7.9-inches (200mm) of ground clearance and a higher seating position for the driver. The suspension mountings gave it more wheel articulation, the vertical distance that wheels can travel, and that added to its off road and on road capabilities.

The next morning in Vail we drove the 2017 XC60 T6 AWD Inscription south to Buena Vista River Runners with a stop at the Tennessee Pass Nordic Center for a driver change.

In Volvo’s new nomenclature the difference between T5 and T6 is really a supercharger, both engines are equipped with a turbocharger. But Volvo has installed a blower that works in unison with the turbocharger on the T6. The supercharger handles low speed forced air induction and the turbo handles high speed induction.

This engine too was a 2.0-liter four-cylinder mated to an eight-speed automatic transmission. It made 302 horsepower and 295 pound-feet of torque at 2,100 rpm. The XC60 had a fuel efficiency rating of 20 mpg in the city, 27 mpg on the highway and 22 mpg combined.

The most remarkable thing about this super-turbo engine was its power delivery. We remember testing the engine in Las Vegas a couple of years ago, where the elevation was 2,000 ft. Driving across this plain which was at roughly 9,000 ft., there was no difference in oomph. On two-lane highways, we swung out smartly, passed and got back in our lane quickly without any anxiety. We had the same exhilaration doing the same thing just outside of Las Vegas.

This time of year the pavement was dry. And that meant that although all of the Volvo models we test drove here were all-wheel-drive, on dry asphalt they were front-wheel-drive. When wheel slippage is detected, up to half of the torque can be sent to the rear wheels. What’s more, using the traction control system, torque can be sent from side-to-side.

The 2017 XC60 Inscription’s interior conveyed the luxury that went along with its $53,555 sticker. There were linear walnut inlays on the floating center stack and door handles. It had adaptive cruise control, collision warning with full braking, pedestrian and cyclist detection with auto braking, distance alert, lane departure warning, active high beams, road sign information and a premium sound system.