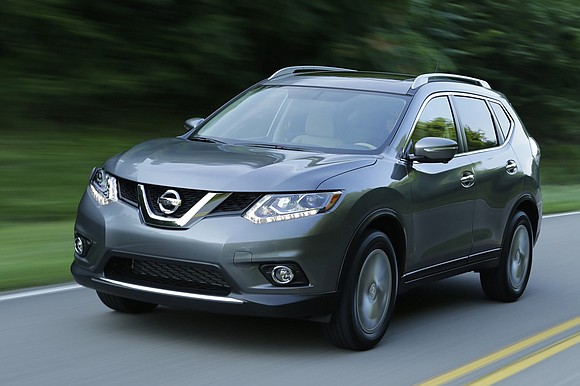 The Rogue is now endowed with forward emergency braking and NissanConnect℠ Services powered by SiriusXM®. And it is the first model in Nissan’s lineup to offer Siri® Eyes Free, which allows drivers to interact with Siri® on their compatible Apple iPhone®.

Our test vehicle had much of the same equipment that we found on a luxury crossover that cost a lot more than its $29,815 sticker. It had heated front seats, a power liftgate, LED daytime running lights, heated sideview mirrors with LED turn signals, blind side alert, voice controls, satellite radio, surround view and moving object detection.

We had the SV premium all-wheel-drive package. That meant there was a third row of seats, giving this Rogue the capability of carrying seven people. The interior was black cloth and there was 70 cubic feet of cargo space with the rear seats folded.

The front bucket seats were branded zero gravity that provided continuous support from the pelvis to the chest. We don’t know about all that but they were comfortable. Not once were we stiff or tired after driving the Nissan Rogue.

The driver’s seat was six-way power adjustable while the passenger seat was four-way adjustable. The power window of the driver was full automatic but the rest of the windows were old fashion, we had to hold the button for them to go all the way down or up.

The center stack was easy to reach and easy to see. The infotainment system had a touchscreen. Auxiliary and USB jacks were at the base of the center stack. There was a 12 volt plug alongside them and there was one in the center console. The Rogue also had a rearview camera and a smart key with push button start stop.

The Rogue was really compactly styled, thus, it was surprising that it had three rows of seats. But there was plenty of interior space in the first and second row. That third row was the dominion of kids but that’s fine; they’ve got to ride and so do their friends.

Of course, the crossover featured Nissan’s floating V grille. The lines were smooth, the edges had been rounded and the crossover’s stance had been pushed forward just enough that the Rogue looked like it was in motion while still.

The Rogue had wide opening rear doors, 77 degrees. It had a long wheelbase, short front and rear overhangs and large wheel-wells. Nissan said that the Rogue’s rather slippery 0.33 coefficient of drag was created by optimizing the A-pillar section and outside mirror shape and that also reduced wind noise.

Our only quibble had to do with those side mirrors. When making a right angle turn at night into something tight like our driveway there was a blind spot, we could not see the entrance to the drive for the mirror and its housing. But it wasn’t too bad.

The 2016 Nissan Rogue was powered by a 2.5-liter four-cylinder engine that made 170 horsepower and 175 pound-feet of torque. It was mated to a continuously variable transmission (CVT). It had an EPA rating of 25 mpg in the city, 32 mpg on the highway and 28 mpg combined.

Nissan is arguably the most committed manufacturer to CVTs. Branded Xtronic, this CVT had a sport mode and an eco-mode. With 40 percent less friction loss, an improved belt and pulley system, reduced oil friction, compact oil pump, new electronic control, wider gear ratio and other enhancements the transmission was 10 percent more fuel efficient than the previous design.

The Rogue ran well. The knock on CVTs is that they render a vehicle slow. But the Rogue was rather quick. Under hard acceleration, the transmission was still a little loud but the vehicle was peppy, especially from 40 mph to 60 mph.

And there was a lot of technical equipment. A forward camera was a surprise. The Rogue also had active trace control, active engine braking and active ride control.

We had a four-wheel independent suspension, electric power steering which offered a little road feel, disc brakes all round, of course ABS and vehicle dynamic control with traction control. There was Hill Start Assist. We had intuitive all-wheel-drive which meant the 2016 Rogue operated in front-wheel-drive mode until wheel slippage was detected.