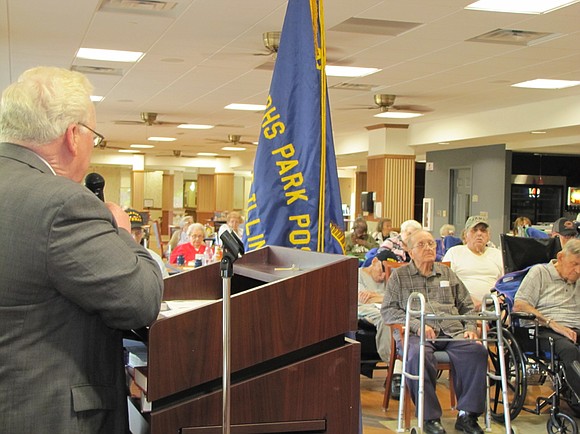 JOLIET – Fourteen veterans whose service spans World War II and the Korean and Vietnam wars were honored at Sunny Hill Nursing Home of Will County on Thursday, Nov. 3.

The 13 men and one woman served in the Air Force, Army, Army Reserve, Coast Guard, Marines, National Guard and Navy.

Although veterans’ devotion to their country are recognized on Veterans Day and Memorial Day, they should be thanked every day for their service, Will County Executive Larry Walsh told the group gathered at the county-owned nursing home.

Walsh spoke in the service that also featured residents and Joliet American Legion Post 1080 presenting and retiring the colors. In addition, the Legion Auxiliary presented each of the veterans with a cap at the ceremony’s end.

The residents were presented certificates by Roger Bentley, one of five veterans who work at the facility. In addition, a quartet from Sunny Hill’s American Sign Language class performed three songs, ending with God Bless America.

Sunny Hill Nursing Home of Will County is at 421 Doris Ave. It is led by Director Karen Sorbero, and is under County Executive Walsh’s office.