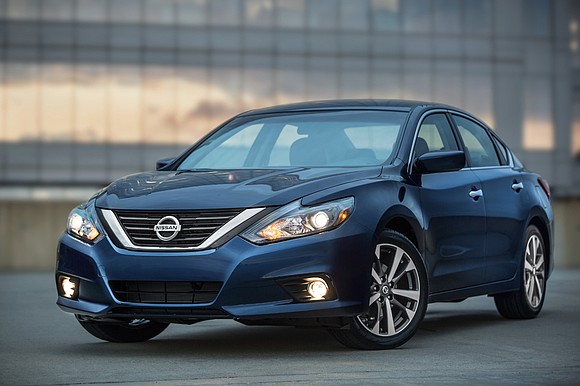 DETROIT – The Nissan Altima is one of the hottest midsize sedans on the market. It has racked up five straight years of sales growth. And it was redesigned for the 2016 model year.

The car was sleeker, it featured Nissan’s floating V-motion grille and the sheet metal was completely changed; yet it still looked like an Altima. The front fascia was lowered and the car had a new bumper. The hood and fenders were new and the car had tailored character lines.

The headlights were also redesigned. The car’s rump got restyled too. There was a new fascia and bumper. The taillights were lower, they featured a wider four-piece assembly and they had the boomerang shape that is now a part of Nissan’s new face.

The car’s drag coefficient was lowered to 0.26 from 0.29. This was accomplished by adding active grille shutters, under floor aero covers; the fascia redesigns and a new windshield design. More high strength steel was used to reduce weight. Steps were taken to enhance the Altima’s durability, quality and reliability but only time will time if they got it right.

But the effort to reduce NVH, noise, vibration and harshness was a success. There’s a miserable piece of road here called Outer Drive between Seven Mile and Livernois. It is a patchwork of small potholes, granular asphalt patching and not a smooth spot more than a yard long to been seen or felt.

Our 2016 Nissan Altima got over that piece of road in good order. The car had a solid feel, there were no squeaks or rattles and the suspension absorbed most of the bumps. The Altima was relatively quiet no doubt due to its new acoustic glass windshield. Not too much road noise got into the passenger cabin and the seats were comfortable.

Nissan used more insulation and sound barriers in the firewall area to lessen the noise form hard acceleration. New engine mounts were used and the muffler size was increased to reduce the sound of the Altima’s continuously variable transmission (CVT).

The 2016 Nissan Altima had a 2.5-liter fuel injected four cylinder under the hood that made 182 horsepower and 180 pound-feet of torque. It was mated to Nissan’s next generation Xtronic CVT. The front-wheel-drive sedan had an EPA rating of 37 mpg in the city, a hefty 39-mpg on the highway and 31 mpg combined. Our test drive lasted a week and the test car still had more than a half tank of fuel left when they picked it up.

Our tester had a charcoal cloth patterned interior. The car also had a new C-stack and center console, which Nissan said, was easier to use. The company said the new C-stack shared the gliding wing look found in the Murano and the Maxima.

The Altima featured Nissan’s Zero Gravity front seats, which were standard on all trim levels, utilize an articulated seat shape with continuous support from the pelvis to the chest and distribution of localized deformation characteristics. That sounds complicated; the bottom line is they were comfortable and made driving the Altima pleasurable.