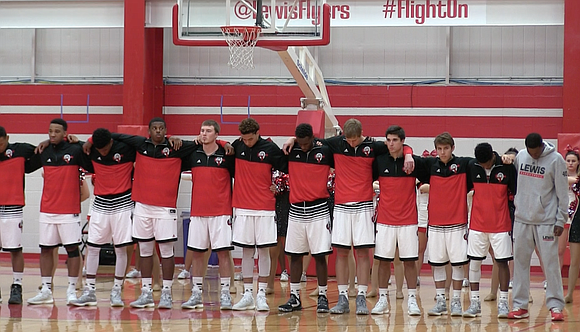 Lewis men's basketball team lines up for the National Anthem before its game agaisnt Michigan Tech on Nov. 12. Photo by Alex Ortiz

The Lewis men’s basketball team fell to 1-3 this season with an 84-72 loss to Ferris State on Saturday on the road. Still, the Flyers managed to out-rebound the Bulldogs by 16 and had four players scoring in double figures.

Sophomores Delaney Blaylock and Frank Vukaj had 14 points each, junior forward Nick Norton had 12 and senior guard Miles Simelton had 11 of his own. Blaylock and Vukaj recorded nine and eight rebounds respectively. Despite a good rebounding performance as a team, it went 0-10 from beyond the three-point arc.

The Flyers will play again on Tuesday Nov. 22 at home against Hillsdale. Tip-off is set for 7:30 p.m.

The Lewis women’s basketball team set a school single-game record with 29 assists on its way to a 91-47 drubbing of Davis and Elkins on Saturday.

Senior guard Jamie Johnson led the team with 12 points. Sophomore forward Jessica Kelliher and junior guard Tiana Karopulos had 11 points each. Senior guard Alyssa Siwek and sophomore guard Kayla Brewer each contributed 10 points. The Flyers were 56.3 percent from the field including 10 three-pointers. All 13 Flyers scored in the game.

Lewis improves to 4-1 on the season and returns to action on Tuesday Nov. 22 at home against Northwood. Tip-off is set for 5:30 p.m.

The St. Francis women’s hoops team narrowly defeated Huntington 74-73 on Saturday in the title game of the Huntington Classic. The Fighting Saints remain undefeated at 5-0, the second straight year they’ve done so.

Senior Charnelle Reed recorded her second double-double of the young season with 28 points and 13 boards, both tops for the contest. Junior Christina Ekhomu had 18 points.

The Saints are at home on Tuesday night against CCAC rival Holy Cross College at 5 p.m.

The Fighting Saints men’s basketball team won its home opener against Holy Cross College on Saturday 72-61. Saint Francis improved to 1-2 overall and 1-1 in conference play with the win.

Saint Francis will play again in an exhibition game on Monday night at the University of Texas-Arlington.