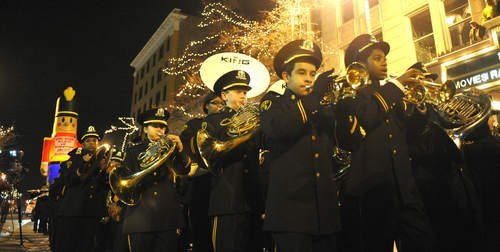 Light Up the Holidays in downtown Joliet is a daylong festival that's capped off by a parade and fireworks display.

Joliet will kick off the Christmas season the day after Thanksgiving this year with a parade and festival downtown.

An annual tradition for 19 years, ‘Light Up the Holidays’ begins with activities at 9:30 a.m. and will run through the evening with a tree lighting at Van Buren Plaza at 5:15 followed by a parade at 5:30.

Old school gamers can play pinball at the Chicago Street Pinball Arcade starting at 10 a.m. and running through 11 p.m.

Parents can also have tea with their toddlers and their teddy bears at Teddy Bear Tea at the Rialto Square Theater which will also be showing “A Christmas Story” at 3 p.m.

The event has become an annual tradition for families in Joliet and the surrounding area said Don Fisher, one of the organizers of the first parade back in 1997. Fisher said that the event was popular from the start, no doubt helped by 72 degree weather the night of the first parade.

Fischer said that he and then City Center Director Tom Mahalik were looking to create a unique family event to bring people downtown.

They decided on a nighttime, lighted parade and included a fireworks display to give the event a “Disney-like” feel. They advertised the event through area schools and then hoped that people would show up.

“We were very worried if anyone would come downtown at night,” said Fisher, manager of buildings and grounds at the University of St. Francis, who worked for the City of Joliet for 32 years, and was planning director at the time.

“It was packed,” he said of the first parade, “and it it’s been packed ever since.”

Fisher said that he’s seen the same families attend each year and is now beginning to see a second generation of kids begin to attend with their parents.

“We’re very lucky that people have embraced this celebration,” he said.