Another Day in the Death of America : A Chronicle of Ten Short Lives” by Gary Younge 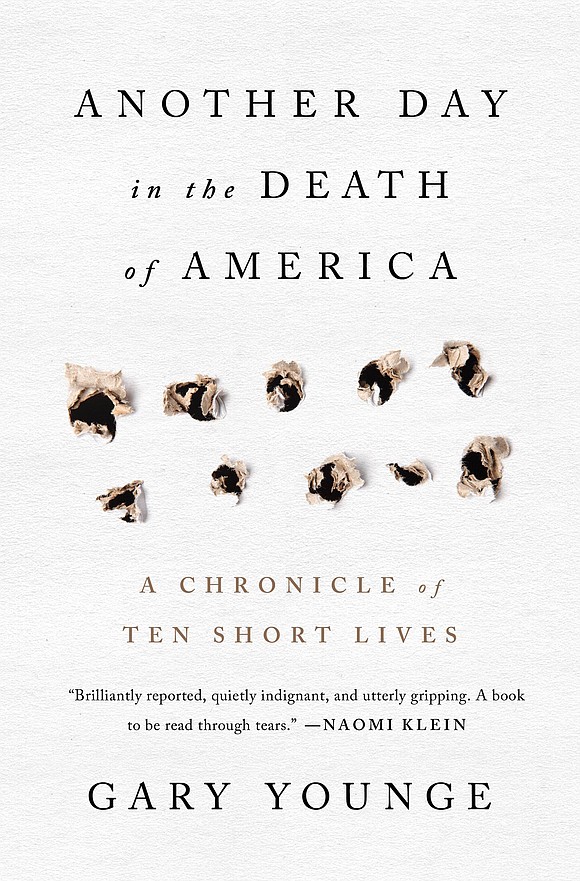 Today was an ordinary day.

It had its ups and downs; pleasant surprises came between the mundane and the irritating and you’ll look back at it tomorrow with clarity, perhaps, but its details will be sketchy in a decade. It was an ordinary day, which, says Gary Younge, also means an average of seven kids in the U.S. lost their lives to a bullet. In “Another Day in the Death of America,” he explains.

On November 23, 2013, most Americans were preparing for Thanksgiving. We were marking the anniversary of JFK’s assassination and watching the weather, the news on Iraq , or the Baylor / Oklahoma State game. We were enjoying our weekend. And on that Saturday, ten random children died of gunshot wounds in this country.

That, says Younge, has become too normal. It barely even registers anymore. For awhile, there were websites that tracked this kind of thing but for the most part, the deaths of these “kids” – coincidentally, all boys on this day; seven African Americans, one white, two Hispanic – are unmarked, except to families and locals.

The youngest, nine-year-old Jaiden Dixon, was a “giving soul” with a “valentine” he thought he might marry someday. Preparing for school on a Friday morning, he opened the door for his mother’s ex-boyfriend, who shot Dixon in the face.

Dixon died the next day.

The girlfriend of Kenneth Miller, who was “just three days shy of his twentieth birthday,” learned of his death through Twitter. Seventeen-year-old Stanley Taylor was killed over “spontaneous drama.” Legally blind, eighteen-year-old Pedro Dado Cortez worked for his father and dreamed of learning to drive.

Eleven-year-old Tyler Dunn was shot by a playmate, while sixteen-year-old Edwin Rajo was accidentally shot in the chest by his best friend. Samuel Brightmon was “conflict averse,” Tyshon Anderson had been shot several times before, Gustin Hinnant was an honor-roll student, and Gary Anderson was killed because he wore a red hoodie.

One bullet tore apart a small town. All devastated families and friendships. Some were in areas where “Nobody knows where the next shot is coming from…. But everybody knows it’s coming.”

Before we get any further, there’s this: British-born author Gary Younge doesn’t overtly advocate, nor does he denigrate, gun control but astute readers can catch a clue. He also writes about parenting, particularly within the Black community; about gangs; prisons; and about the NRA and its influence.

And these are interesting subjects but the real power comes in the stories he uncovers in “Another Day in the Death of America.” Younge doesn’t just write about the demises of the ten “kids” he found; he also helps readers understand the men they might’ve become and what we truly lost in losing them. That kind of unflinching journalism packs gut-punching, timely meaning, and you won’t forget it.

“Pick a different day, you get a different book,” says Younge on the randomness of his research, which is perhaps the most poignant sentence you’ll ever read. So pick “Another Day in the Death of America.” It’s no ordinary story.