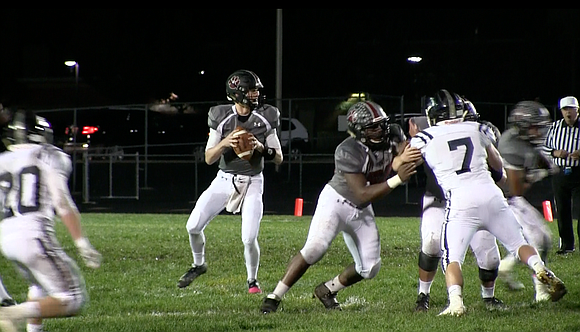 Plainfield North quarterback Brady Miller (12) drops back to throw during his team's 35-0 win over Plainfield South on Friday. ALEX ORTIZ

PLAINFIELD - The muddy and wet field could not stop the Plainfield North Tigers’ (5-2, 5-2) offensive assault against the crosstown rival Plainfield South Cougars’ (4-3,4-3) defense. The Tigers, on the school’s Homecoming weekend, shut out its second straight opponent with a 35-0 win over the Cougars; the team beat Joliet Central 41-0 last week.

The Tigers opened fast with a quick passing attack and got up on the Cougars quickly with touchdowns on its first two drives.

“I think they have a good run defense,” Plainfield North head coach Tim Kane said. “We saw them on tape quite a bit and people don’t move that easily on them. We felt like we had to throw the ball some.”

Plainfield North quarterback Brady Miller had great command of the offense and led five scoring drives all ending in touchdowns, three of which he threw. Wide receiver T.J. Kane caught two of them including a 25-yard catch on the opening drive.