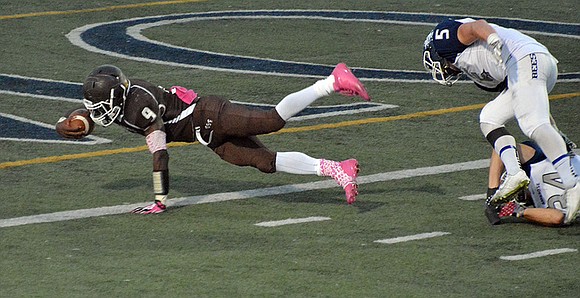 JOLIET - The Saint Francis Fighting Saints snapped their two-game losing streak on Saturday against Saint Ambrose with a 35-14 win. The Saints won with a solid ground game and freshman Michael Johnson and sophomore Jordon Smith combining for more than 191 of the team’s 265 rushing yards.

The Saints are now 2-4 overall and 1-2 in conference. This is the Saints’ third win against the Bees in the last four years.

Johnson had a career day with 114 yards on 16 carries which resulted in 7.1 yards per attempt. Junior quarterback Don Butkus led an offense that gained 519 total yards. Butkus completed 22 of 27 passes for 254 yards and a touchdown. He also gained 54 rushing yards and two touchdowns.

Next Saturday, the Saints are again at home against Davenport. Kickoff is at 1 p.m.

The Saints will be in Whiting, Indiana on Tuesday to play Calumet College of St. Joseph in conference play at 7 p.m.

Fuller’s hat trick is the team’s first since Jessica Chavez’s back on Sept. 13 against Indianapolis in a 5-2 win. Fuller netted her goals in the 16th, 88th and 97th minutes.