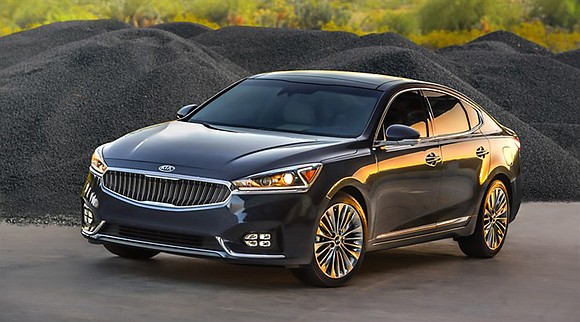 Middleburg, Va., – Kia reminds us of the tale about the hare and the tortoise, with the Korean automaker in the role of the latter. It methodically keeps putting one foot in front of the other until it arrives at the target. When Kia first came to the U.S. market in 1994, it finished dead last in the country’s most prominent Initial Quality Survey. This year the automaker finished first.

You could say the same thing about the Kia Cadenza. Since it was introduced in 2013, only 28,000 of the large sedans have been sold. That’s not a lot but those sales are in a segment of the market that the automaker had no offerings, thus, each one added to the bottom line.

So is the glass half full or half empty? Looking at Kia’s record the smart money says the glass is half full. Kia has redesigned the Cadenza for 2017 and will obviously push on with this large sedan, which should be taken seriously as the automaker widens the wedge it has created in the large car market.

It is PR hype but what Kia has given the second generation Cadenza is a stronger body structure, power enhancements and made its driving experience more engaging. But first the automaker refined the sheet metal.

The Cadenza’s design for 2017 is evolutionary; you’ll know the new Cadenza when you see it. But the redesign is sleeker, a little more sophisticated. It’s newer. The new car had Z shaped accent lighting in the headlamps and the LED taillights that made it look sharper.

The car had a new fascia with air slits on the ends for better cooling. The tiger nose grille was prominent but on the 2017 Cadenza it was concaved toward the engine bay. But the grille has also evolved into a new hexagonal shape that emphasizes the Cadenza’s visual width with lines extending underneath the headlights. What’s more, two grilles are available depending on the trim line.

Kia said lower trim models of the Cadenza will come with the “Diamond Butterfly” grille that features the same three-dimensional pattern as several siblings within the lineup, but with its own unique appearance thanks to the curved form. Higher trim models will come with the “Intaglio” grille, featuring vertically oriented, faceted blades. Whichever, they both will be tiger nosed grilles.

Chrome garnishes as Kia called them were added to the trunk-lid, side mirrors and rear quarter windows. And chrome was added to the side molding. The overall length remained the same but the car was slightly wider and lower. The wheelbase was “stretched” increasing legroom by almost a half-inch. Rear seat space rivaled full-size sedans. The roofline was extended rearward by more than two inches; that improved trunk space a little. We took a look and the trunk seemed big enough that you could hear an echo if not for the carpet.

Stylists spiffed up the Cadenza’s interior too. They used better quality materials; they widened the space by giving the sedan a wraparound dashboard that flowed into the door panels. And they said the dash featured real stitching (which can be faked these days). The door panels featured soft touch materials that were noticeable during our test drive.