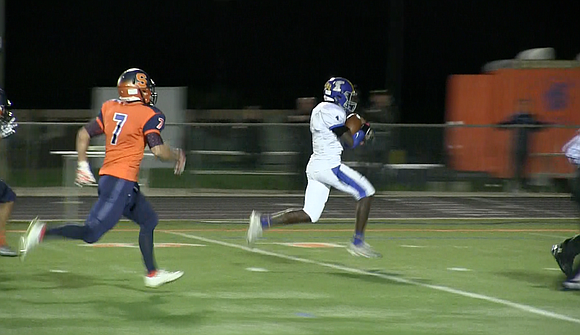 Joliet Central wide receiver Jomarre McNair runs away from the Romeoville defense for one of his rushing touchdowns in his team's 42-40 win in the last week of the 2016 regular season.

ROMEOVILLE - It was certainly a wild one on Friday with history being made yet again as Joliet Central notched the team’s second win of a season in which the team broke their five-year losing streak.

The Romeoville Spartans opened the game strong with a 12-0 lead in the second quarter but the Steelmen answered right back every time.

Joliet Central wide receiver/defensive back Jomarre McNair had a big game on the ground taking the direct snap from center and running right into the line and past the entire Spartan defense multiple times. With a touchdown pass to Nolan Soper before halftime, Romeoville retained a 20-14 lead at halftime.

McNair opened the second half with another rushing touchdown. Then when Romeoville got back on offense, he intercepted a pass and the Steelmen were able to capitalize and take the 28-20 lead off a passing touchdown from Zachary Wisneski to Zach Schraer.

The Spartans had one last play in them with yet another Soper touchdown catch that saw him jumping over a couple of defensive backs.

But a botched snap on the attempted 2-point conversion to tie the game fell short and Romeoville ultimately failed to put away the Steelmen. The final score was 42-40.

“You have to credit where credit is due,” Romeoville head coach Oliver Gibson said. “Joliet Central played the game of their lives.”