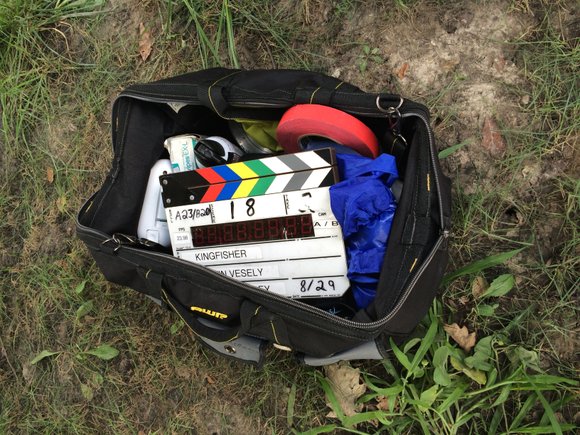 A corpse was lying under a sheet on a Western Avenue home’s porch in Joliet this week as a couple of police officers and a gaggle of ghosts surveyed it all from behind crime scene tape.

Neighbors from across the street were watching too as filming continued on “Kingfisher” an independent film being shot around the city through the end of September.

Karl Johnson, one of the Western Ave. neighbors said he had been watching the film crew set up since the morning and had even been curious enough to check out the film on IMDB to see when the movie would be released.

“I’d like to see the movie once it’s completed,” said Johnson who is the fourth generation in his family to live on the street in Joliet’s cathedral district and like many of his neighbors was getting a first-hand look at how movies get made.

Brett Hays, a producer on the film, said that the production got started at the end of August. After scouting locations, he said that the movie’s director, Austin Vesely, a Chicago native, knew instantly that Joliet was the place to set his fantasy/comedy in the fictional town of Kingfisher.

“Joliet has the look he wanted,” said Hays whose studio, Shatterglass Studios is based in Champaign.

Hays said that local residents, businesses, and city officials have been very supportive of the production.

“The support we’ve gotten from the community has been great,” said Hays who said that city officials have worked with the filmmakers to clear permits and that about 300 residents reached out to work on the movie as extras when news broke that it would film there.

Even after filming started, Hays said Monday that about 3 hours before shooting that day’s scene he found another piece to add to the film—a vintage police car at Dick’s Towing, 911 N Broadway St. After a call to the owner it was brought to the set another example of the hospitality on display from local residents he said.

Daniel Jacobsen of the Heritage Corridor Convention & Visitors Bureau in Joliet said that his office was contacted about a month and a half before the film was set to shoot to help secure local hotel rooms for the filmmakers as well as local caterers.

Jacobsen estimated that the film’s economic impact from just the lodging would translate to about 800 hotel room night stays for the crew members. Along with meals, shopping and other purchases he estimates that could bring as much as “$221,760 worth of economic impact to the Joliet area.”

“It is bringing in a big chunk of revenue for the City of Joliet through tax revenue,” said Jacobsen.

This isn’t the first time that Hollywood has come calling in Joliet. The Fox Television show Empire has shot in the city twice in 2016, the last time in June and had also filmed scenes in November of last year, using local sites including the historic Rialto Square Theater for its production.

Around the state, film and television production revenue brought in about $330 million to state coffers according to numbers provided by the Illinois Film Office. That’s an increase of 18 percent from 2015, when the state saw 291 television, commercial and film projects go before the cameras.

In Joliet, Economic Development Director Steve Jones said that in addition to the economic benefits the city receives from films being made in town; the productions also bolster its reputation as a friendly place to do business.

He said that the film and T.V. productions include “activities that fill a lot of different niches” in the economic landscape from hotel room stays, to food and gas purchases and other supplies as run of the mill as duct tape.

Jones hopes to snag more productions in the future for the city telling the crew working in town right now, “make sure the Illinois Film Office hears about” what a great experience it’s been. He said the city offers great backdrops and less congestion and expense than working in Downtown Chicago too.